A poem about a Mime,Clown and Medical doctor 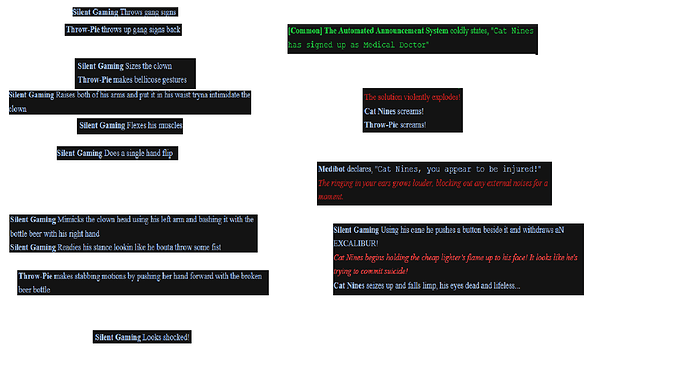 bruh moment1920×1080 97.4 KB
Once upon a time there was a mime his name was Silent Gaming,He was a jester because he liked Messing around with crowds and making them entertained!
On a fateful afternoon he met a clown who was known this clown was beloved and rugged her name was Throw-Pie!
Now this clown had struggled to hug and laugh but she caught Silents Gaming thought.They fought and brought distraught to the bar but they thought to stop.They began to talk and so they talked and talked the both of them thought their distraught was for naught and so the two made up,As they were getting along a spawn of the Devil arrived it was Cat Nines now this Medical Doctor was no protector and he was just big as a pebble as i saw him walk to us i was in tremble when i looked at him he really looked like the Devil.As he joined us at the table the Clown looked at him with and was overjoyed but to alas our times was spoiled i was pretty annoyed the Devil really does disappoint.
4 Likes
TheA1ternative April 18, 2021, 1:07am #2

If this is a serious patrol could you please write it not in rhyme & riddles so I can understand what the issue is.