Ban Message (Gyazo/imgur or copy and paste): https://imgur.com/kb9jYQe
State your appeal: Like I said in my other appeal I try to be polite and understanding in ahelps, I don’t swear at admins or lie to them, and I still get treated worse in them than I do in Xfinity customer support. At least they feel obligated to lie to me with things like, “I understand, sir, I am very sorry for this inconvenience.” I don’t understand why so many admins ask you a question and then wordlessly ban you 10 minutes later. I’m an adult and this is a video game, you can talk to me about it at least a little bit.

I don’t think what I did warrants a 7 day ban, no one was killed let alone round removed permanently, and I stopped as soon as I was bwoinked over it. The rest of the service staff were getting beat up and shot at by the bartender so I made a bunch of monkey cubes and watered them in the bar. After the initial wave of monkeys I kept making more cuz it was funny. After the bwoink I knew this was wrong and unacceptable, but I didn’t explain myself further cuz I wasn’t expected to get banned without a word after only saying 2 things. If I knew a ban was coming after 10 minutes of silence, I would’ve kept talking in a vain attempt to find the right combination of words to express remorse.

I hardly ever play non-sec, so I don’t know for sure what shenanigans are IC acceptable and what aren’t outside of the obvious (murder, ERP, kidnapping, repeat offenses, bigotry, etc) - when I see greytide happen as sec I just throw them in brig and don’t think about it, and the only time I felt the need to ahelp a suspect was when he was ERPing. To reiterate, this is part of why an admin saying 1 thing to me and then banning me with no further talk makes me so butthurt. I am, in my opinion, a reasonable person, I have 0 notes related to my sec play. You can talk to me. You can explain the situation from your perspective. I have the capacity to disagree with your decision and still respect and understand it and abide by it. You don’t have to treat every person you bwoink like a bald black eyed 1 day old account.

The apparent inconsistency of admin intervention doesn’t help with clarifying this for me either. I was once banned for 3 days as an assistant for hacking doors after the admin ignored me when I told him doors being shocked is just a consequence of not knowing the wires. This is obviously annoying and nonsense, but not enough to raise my eyebrow or make a fuss - if not for it being one of the most common petty crimes sec gets called for. Do you know how many nonantags I brig for hacking a door? If I ahelped every single one and you banned every single one sec would be out of the job. I bet if you had statistics on it, the average secoff was arresting at least 1 nonantag for petty hacking and b&e every shift. Again, if the banning admin spoke to me a bit, I wouldn’t have to be writing all this crap out. As sec it’s easy to follow the rules: you just enforce space law, literally just be a cop. Like I said I don’t play non-sec often, so it becomes more ambiguous for me (hence why it’d be nice for an admin to talk to me a bit, before banning me from the game with a focus on talking and interaction); obviously breaking space law isn’t bannable on its own in all circumstances otherwise sec wouldn’t exist, but certainly some law breaking is offlimits.

I was expecting sec to react to my monkey mayhem since I’m certain they saw me do it, and that would’ve been fine, (hell 5-15 minutes in brig with a bwoink saying “don’t do it again” would’ve certainly got the message across) and looking back if I were sec that round and someone said “a botanist is flooding bar with monkeys” I would’ve just arrested them and thought nothing of it. I don’t understand why this wasn’t allowed to be handled in IC (even with a warning and note), or why it was a 7 day ban.

So you spawn an army of monkies causing a lag spike, tryed to weaponize bees, you’ve been talked to 5 times this month alone, while having 2 pages worth of notes, your ckey is towing the line for appropriate ckeys, been banned from two other servers because of your terrible attitude, and think your ban isnt fair. I think it’s not fair we have to deal with you so I’m uping this to a perma. You can try to appeal this in 6months next time please try to stay on topic of the ban.
https://centcom.melonmesa.com/viewer/view/assblastoman 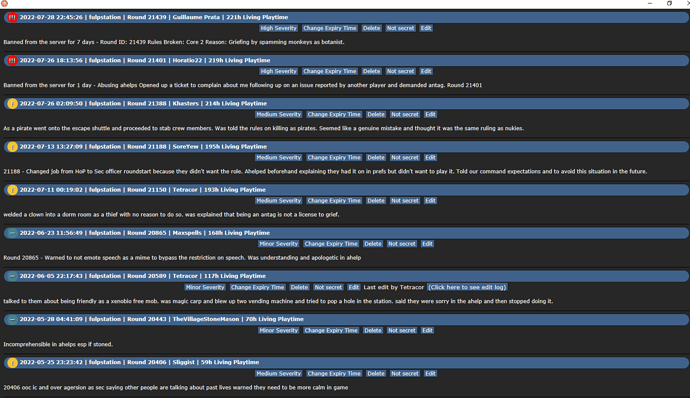