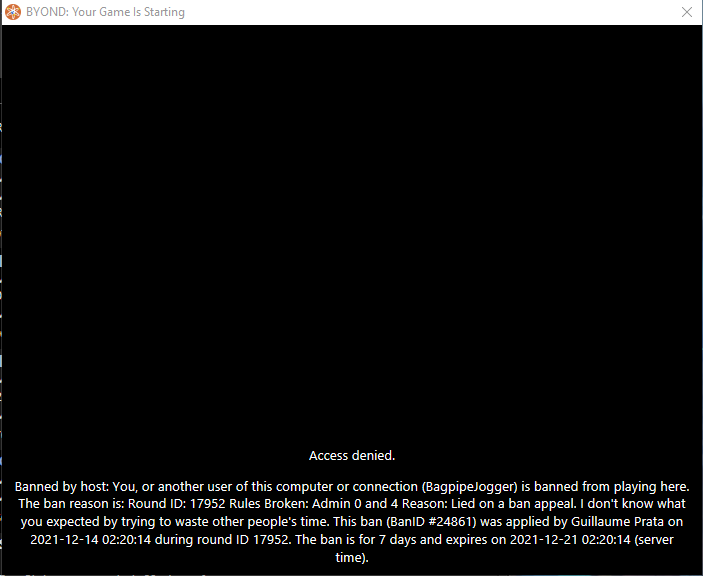 This is an appeal for the ban I received for my previous appeal which accused me of lying and didn’t really address any of the points I made. My hopes for this appeal being taken seriously are low given the circumstances, but nonetheless here it is.

One could be that you forgot, fair, but lying about the round that happened 1 shift before this appeal is clearly malicious.

Denied and you will be extended for the time you made us waste with your lies.

Although at this point I feel like posting this will just result in yet another extension to the ban I’m still going to continue to argue my case here because I feel my actions are being severely misrepresented and the actual reason for the ban is illegitimate and that this fact is being ignored to justify more serious consequences for what amounts to two roundstart suicides in 350+ hours of gameplay, which is being portrayed as something that it’s quite simply not.

I really don’t understand why this is being treated with such hostility when it’s a very minor thing and it really doesn’t paint an image of antag fishing. I’d think people who fish for antag would suicide every round they are not antag and It’s pretty clear I haven’t done that or anything even remotely close to that. This is something that wasn’t address in my previous appeal, nor was the fact that It was claimed I had notes and was on a watchlist which is not reflected in my admin remarks.

It seems very unreasonable to claim my previous appeal is full of lies and was malicious(?) and has left me wondering if it was even read at all, and I’d still like to know why the initial ban I received claimed I had previous notes about suiciding at roundstart which is untrue as far as I can tell.

It doesn’t hurt anyone to be reasonable and give a fair look into this situation, so I’d appreciate I could actually get clarification on the questions I’ve asked instead of being immediately dismissed.

Edit: Also just noticed that the screenshot of the ban message states I broke the admin interactions rule 0 - Harrassing Staff which I have definitely not done. Can you please show some evidence to justify this claim?

I haven’t gotten the chance to look into this yet, but just at first glance, I’d like to clarify that watchlists are never visible to the player. Unlike regular notes, we don’t have the option to make watchlists visible to players, nor would we generally want to. Additionally, antag rolling notes are generally kept secret since making them public would tip people off about what we were watching for. I’d also like to point out that the game logs when someone joins roundstart vs late join. Late join is defined as anyone who doesn’t spawn in right as the round is launching. If you join immediately after, it’s still late join. The logs indicate that you late joined that around; if you saw all the clown slots were full, then yes, you late joined.
It’s 3am my time, so I’ll look more into this tomorrow, but I just wanted to clarify that piece first.

Thanks very much for answering the watchlist/note question, I assumed those things would be visible as a warning but I get your point about not wanting to tip people off. As for the late-join/roundstart thing I forgot to ready up at the start but joined the second the round properly started, although I see why it would be considered late-join in the logs.

I feel it’s also important to point out that the first thing that happened to me that round was accidentally stepping off the arrivals shuttle before it had arrived, and I did make an effort to get back to the station. I hadn’t decided I didn’t want to play the round anymore until I managed to get back to the station and left medbay. I didn’t feel like continuing to play and just wanted to observe, but wanted to die in a funny way (glove suicide) rather than just ghost in the hallway, since there are no cryopods on the server (If there are I haven’t seen them).

I just think this could have been handled a lot more reasonably. As I said in my previous appeal, I usually enjoy playing the game whether antag or not and it was never my intention to antag roll. I’ll certainly not be committing suicide in-game again though after this, although I also would have not done it again if I was simply asked. I assume that ghosting would likely also be interpreted as antag rolling so what would be an acceptable alternative given the same circumstances?

This reads more like a misunderstanding than someone actually lying in your previous ban appeal. I didn’t (and won’t) look into the other ban, but I don’t think this one was applied correctly, so I’ll be accepting the server ban appeal (and leaving the antag ban). However, please try to be a little more respectful in any future appeals.