Ban appeal-Horatio22 for some reason

Ban Message: You have been banned by Horatio22 from Roles: Appearance, Emote, Deadchat, OOC, Urgent Adminhelp. Reason: Core 9- toxicity Overly toxic in dchat about how other players were playing their antag role. Take a break and appeal on the forum when you can be civil. Round 22566
This ban is permanent. The round ID is 22566.
To appeal this ban go to Ban appeals - Fulpstation

State your appeal:
I wasn’t even slightly toxic. 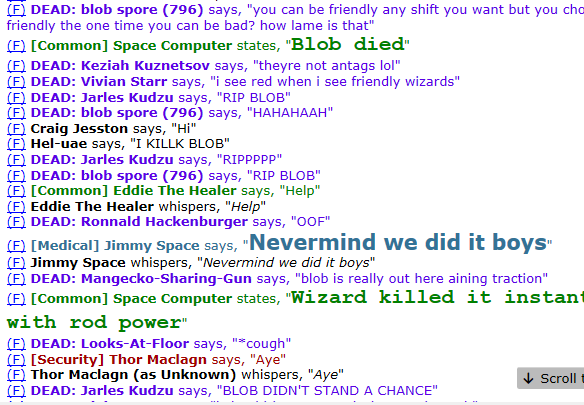 I actually had nine screenshots or so of the logs, but I lost them when the server restarted and it won’t let me post more than one embedded item anyway, so go fish up my say logs and the say logs of blob spore (4) and Keziah Kuznetsov to see what the conversation we were saying was.

Basically, I got banned completely out of the blue by Horatio for saying nothing inflammatory. I didn’t call anyone out. I didn’t insult the wizard. I didn’t pick on the Nightmare other than ask why it tried to kill the blob and I left it alone. I even tried to convince someone that RP is fine.

Then I got a permanent appearance, ahelp, OOC, and deadchat ban. Same admin also instantly closed my tickets (unrelated) about a HoP going out of their way to beat a chaplain to crit for trying to stop a wizard, but i’m sure that had nothing to do with it.

Basically? I did nothing even remotely wrong and nothing out of line with what anyone else was saying in deadchat except slightly longer. Friendly antagonists are boring. I didn’t insult anyone by saying it, I didn’t pick on anyone, and if he was irritated he had ample time to send an adminPM saying ‘you are being toxic’, which, even given my past history, is probably a first step.

ESPECIALLY given that on round 22579, an admin sent a deathsquad to the station specifically to demote the HoS and kill a friendly nightmare, citing that ‘antagonists aren’t supposed to be friendly and this was a RP friendly way of handling it’, so it seems like ‘no friendly antags’ is even standard admin policy.

I said nothing out of line. My large posts might have looked angry, but I wasn’t calling anyone out or saying anything insulting, I just type that way by default. It was all pretty much ‘friendly antags are boring’, which pretty much everyone in deadchat agreed with, and then a joke at security officers. Then there was an irrelevant deadchat conversation where Ellis said RP was cringe and I told him that just because fulp doesn’t have RP doesn’t mean RP is bad and it’s just playing a character.

Figures. The one image that uploads is the one that doesn’t even have a quote from me in it.

I couldn’t have said more than six posts on the thing and none of them called anyone out or insulted anyone. If that justifies a toxicity permaban from appearance, dsay, and adminhelps, that’s surprising.

List of things you said in the shift:
1- Complain about the the acting captain HoP for helping a friendly wizard and that the HoP should be banned.
2- Keep rule lawyering on your ticket about the HoP vs Chaplain, saying that it is fine to play as CMO and kill crew to protect antagonists, a really dishonest comparison with what the HoP did and pure self antaging.
3- That griefing and security doing their job are completely indistinguishable, funny as you had to be banned for being abusive as security…
4- Go on a rant about no one RPing on Fulp, which you repeated on this post.
5- Shit talking people on dead chat because of their misspellings.

With the bans you got for being abusive as security, using your antag rolls to grief or murderbone and your rant about RP on Fulp, it is pretty clear that Fulp is not the best server for you and both sides will benefit from going their separate ways.

I removed the misplaced bans and changed to the correct one, which is a permanent.
You can appeal again in 6 months.