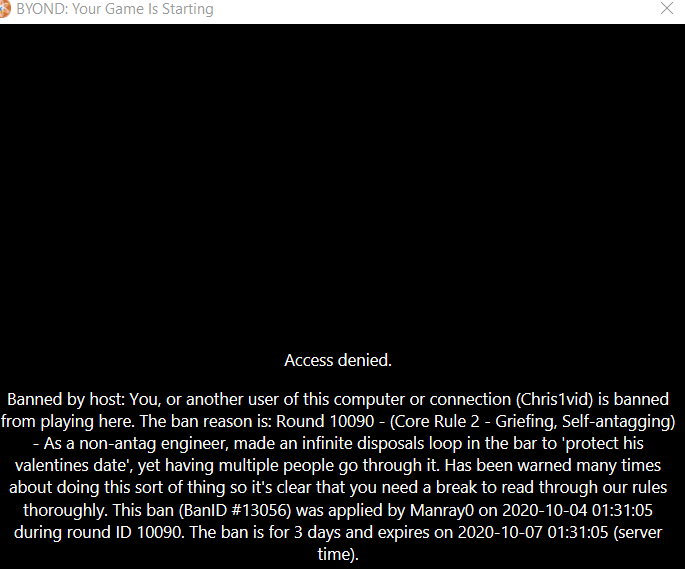 I’ve been getting noted quite a bit recently, and, I completely understand the reason for my banning following the reason above, and im fine with the ban, however, I would appreciate knowing if there’s any way to see my current notes so I can check what I’ve done wrong, and can fix that behaviour. I felt like this was probably the most appropriate area to ask. I’ve read the rules over twice since the banning, and am a bit confused on the ruling here, and feel I was following the rules, despite my actions.

For example: this specific circumstance saw the server undergo a valentines day event, and a number of clown monstrosities were also spawned. Long story short: I got a wheelchair for “Longface” and asked for my promised reward. He told me that, if he had an intercomm, he could say something I want on the intercomm. The map was heliostation, and we were close to the bar, so naturally, I asked to use the barkeep’s intercomm, which they told me no, and threatened to shoot me. Wanting to create some non-lethal action to spruce the round up, I pridefully told the barkeep that I accepted her challenge, grabbed a nearby stun baton, and hopped over the counter, then handily stunned her and took her ID, opening the bar, and allowing Longface access to the intercomm. I then gave her back her ID and she retreated.

After Longface did what he asked, my valentine came along, and we started to joke and mingle. As we did, the barkeep from earlier came in, and shot both me and my valentine a number of times. I threatened to beat her up after she hurt my valentine, and she started shooting at me as I was trying to heal a mime she had bludgeoned to crit with some silencer i had made on the spot.

I healed the mime, taking 6 shots from her in the process, and then began to retalliate, but she fled before I could do anything. Then she went into hiding, gathering a number of PDAs to message me with, so as to freak me out, while she was in disguse and near me. I, meanwhile, had a RPD from earlier when I tried making a miasma farm in cargo, and to humiliate her, I got a coffin, wrenched it down infront of a chute, and made a 2x2 infinite disposals loop. My plan was to find, cuff, and toss her in the coffin, then chute until she begged for forgiveness and promised to not hurt me or my valentine again.

I’d like to note the disposals loop was in the theatre, behind a layer of metal foam, glass, and with both the coffin and a fuel tank in the way of it. I intended to keep it out of the way so noone would fall into it. I then left and searched for her, as she messaged me and hid from me the whole time. Around then, I got bwoinked, had the chat with Manray, and in my ban message I learnt that apparently people had ran into the disposals loop, despite me trying to make it very out of the way and not hiding the loop under floorboards.

I was under the impression this followed escalation, as I didn’t want to kill her, but wanted a way to do something to her that would be both entertaining and ‘painful’ for her character. I’m not sure how this is self antagging, as the person I’m antagonizing myself towards has already shot me and followed me around tormenting me, and I’m not sure how this falls under grief, as the area is both visible and out of the way, with numerous objects preventing someone accessing the loop, and it would probably take far less than 10 minutes to unweld or bash one of the clearly shown pipes.

Again, I just wanna be made aware what was a step too far (and why), and if there’s a way to access what notes I have, so I can learn from my mistakes and not repeat this stuff in the future. Thanks for reading.

Infinite disposals loops are always against the rules as they both permanently remove people from the round and cause server lag. Disposals loops are specifically mentioned in the definition of griefing, and will almost always result in a ban.

“Griefing: Deliberate actions that interfere with/antagonize other players or will take serious effort and time from other players to fix and/or repair… This includes things like infinite disposals loops.”

Escalation wasn’t followed because the conflict was initiated by you griefing; being told no by another player isn’t justification for stunprodding them as a non-antag. Would this be considered a reasonable reaction to the situation if it took place in real life? Obviously not.

If you’d like to check your notes, you can do so when your ban expires by checking your OOC tab and viewing admin remarks. If you’re ever not sure if what you’re planning on doing is against the rules, you can always ahelp and ask.

The ban looks like it was applied correctly, so the appeal is denied.