Ban Appeal: Skwaab- Self-Antag or: How I learned to Stop Worrying and Love Low RP Servers

Ban Message :https://imgur.com/a/iKte7JC
State your appeal: Not only did I explicitly state I was inciting backlash against the HoP for RP reasons, (stripping and searching me in maints, and then throwing me into the kitchen and requesting I was made into food) and wasn’t going to do anything violent, I stopped after it was requested I did so. The chef also had me grabbed and they have combat proficiency in the kitchen if you weren’t aware so I hardly would call that exagerrated to think it possible I was about to be gibbed, I may even have still had handcuffs on, I don’t recall. All this aside, I see others have been banned for the same stuff, but how is a permanent ban justified? It is excessive for something that wasn’t griefing or done with malicious OOC intent. Horatio22 has been overly heavy-handed and brazen with bans prieviously, I don’t know if he has an issue with RP in general but is it perma-ban-worthy?

To clarify, I first asked whether it was justified for me to take revenge into my own hands, i.e.; attacking sec, a long shot but crazier things have happened. When this was denied I took to campaigning against HoS requesting to Cap they be lynched as a clown. I was then requested to stop this, to which I did, and even after this I was killed and banned. Chadmin move tbqh.

You have so many bans and hours I dont know why you thought that would be ok. You’ve been here 400 hours with 9 bans. And before the “most of my bans are from hurtratio” yes the most active staff member typically has the most bans. You lie tied act like shit and then think your the victim this is denied. 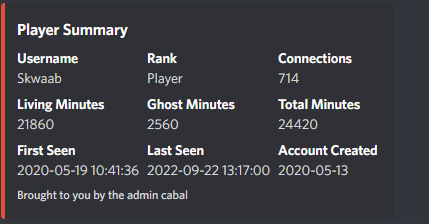 and heres only the most recent notes