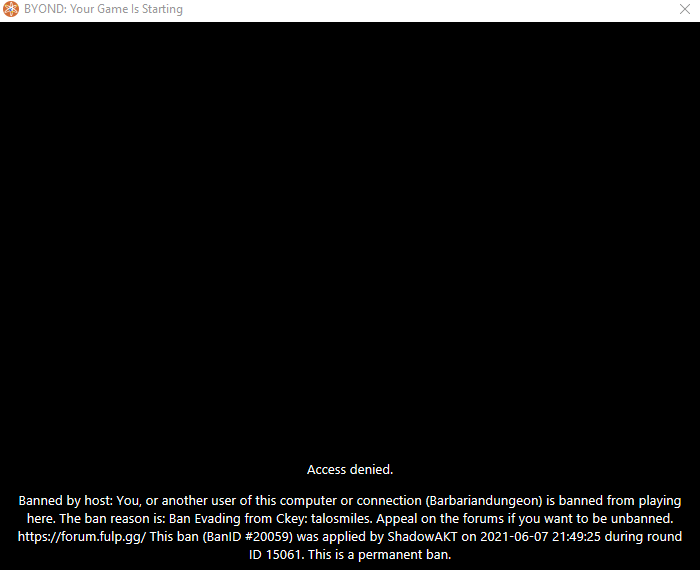 I don’t remember what my original ban was before the evading one so I can’t speak on that (probably killing someone), but I just wanted to do this now. So the account Barbariandungeon was made by a friend because he hasn’t played in a few years so I let him borrow my computer. I had gotten a new router, hard drive, and wifi card so I didn’t think he’d have any issues. Well it turns out I had forgotten that I had tried to connect to fulp to make a ban appeal when I upgraded my computer but I got distracted and forgot I had ever did so. He had no idea was he was getting pm’d by admins and he talked to me about what happened. He said he didn’t want to bother dealing with the forums so we just dropped the topic. Today I thought; “Well, lets try and get unbanned. Its been a year and a half”. So, here we are. I figured I would try to get unbanned because I do actually want to start playing again. I’ll make sure I check the rules see if anything changes and do my best to follow them. I’ll leave my fate to the admins, and I will take a second to apologize for the griefing I’ve done in the past, and would like to move on from it.

If you want to actually appeal your ban, you should do it for your Talosmiles account. Your friend’s account is a different story and they have to appeal it themselves if they’d like to play.

This is for the Talosmiles account, I just mentioned both because this is complicated. I wasn’t sure how else I’d file the appeal.

You should look up the ban reason for Talosmiles then to appeal it. This isn’t the correct ban reason.

I literally can’t, every time I try to check the ban with Talosmiles it keeps coming up for my friends account. He doesn’t care about being unbanned so I just want to unban Talos. I don’t know what to do.

Thanks mate, I’ll make a new appeal tomorrow. How should I proceed with the whole evading thing with the other account?