CrazySaucer
Isaac Harris
CrazySaucer#1465
I forget the round Id
The message said that I attacked people for no reason
I attacked the person at the end of the game because it was the end and nothing was really to do and everyone was attacking each other so I thought why not and attacked them and they were in my way and won’t move.
The host banned me for this which is retarded, like if you ban me then ban everyone because at one point or anther people have attacked other people and the admins do nothing but just stand around

the round ID of the ban is in your ban message, try to join the server and screenshot the ban message it gives you 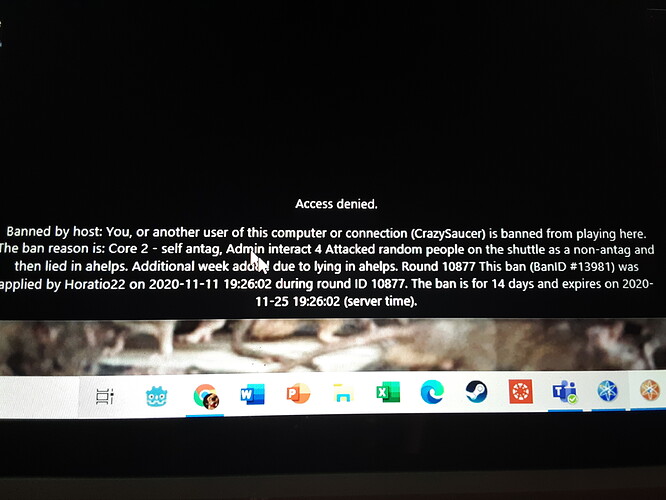 While end of the round grief is allowed, you started attacking people well before the end-round screen appeared. “Everyone is doing it” is a poor excuse for breaking the rules, and shuttle grief is probably one of our most common banning reasons. This ban was escalated due to you lying about it in ahelps until I posted your attack logs. I was the banning admin on this, so I won’t be reviewing the appeal, but I’d ask whoever looks over this to also consider his attitude in the previous appeal as well as his conduct in the Discord (which he was banned from over) and my DMs when making a decision.

Look at them nothing is bad with them and I thought the shuttle was the end of the game when it left, and you seem like the person to get hurt over this and not talk it out in a good way.

In the logs, you’re encouraging people to start killing before even on the shuttle and try to get a gun just before, assumedly to help you kill more people. If you had handled this gracefully, I could easily see this being a ban reduction at least, but your messages here and on discord did not help you at all. Wait this ban out and try to follow the rules once you get back.