The round was very lowpop due to some byond issues that happened earlier in the day, Xar who was the acting captain QM traitor killed the latejoin captain and gave a spare AA ID to the mime. About an hour in the mime decides they’re bored and plasmafloods medical, evac and service then delams the SM using their AA from earlier. They basically admitted to it on the discord so I’d assume they havent been spoken to before, I also didnt ahelp in round because I assumed it was a hijack (why I killed them when they emagged the shuttle) 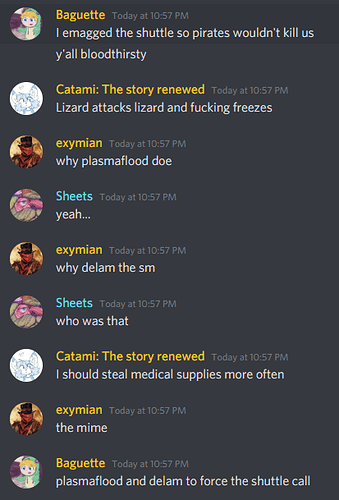 I think about two plasmamen got perma removed by these as well as destroying comms and atmos issues letting the station depressurise with no engineers fixing them.