(I took over Helixus the AI midround as an observer)

During the round I had gotten a modified lawset that made me label all crew as “nice” and anyone who attacked crew as “not nice” thus therefore not crew (as confirmed by captain). Beans held a grudge and made it a mission to shut me down or reset my laws as I witnessed him attacking crew, thus he was not nice and thus not crew.

After he and several other “non nice” people breached my sat with the intent of shutting me down, I did everything I could to deter them from coming close. This served as a distraction to reset my laws to asimov to which he bragged that he “owned” and “curbstomped” me.

I was then taken to shuttle. Beans was there and was not happy with my laws being wiped and decided it wasn’t enough. Decided to kill me on the shuttle while proclaiming I was malf constantly despite the fact that I wasn’t (he was the one responsible for resetting my laws, after all). He even claimed I was actively trying to kill him which simply wasn’t completely true. 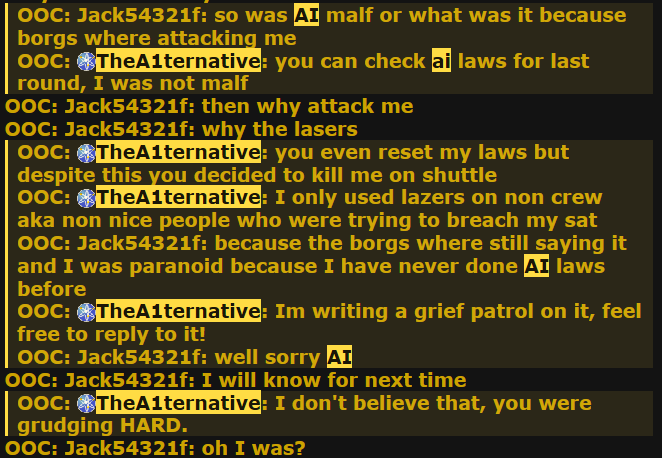 Dealt with, thanks for reporting it