Assistant that kept breaking into morgue to take bodies a minute into the round alleging he “purchased” them. I keep kicking him out as no one backs him up on this claim (My module was Mediborg). He breaks in so much to the point where I have to hide morgue bodies from him and camp morgue.

I’ve flashed and thrown him out so much and reported on his break-ins that he gets a welding mask and flash+laser pointer to counter me. I even catch him stealing a circular saw from medical fab to which security arrests him. After his release he makes a fake wall in mourge and attempts to take bodies that way. I simply put him onto me and *spin him out of the room. He asks for my laws constantly to which I decline to do so (laws were reporter and thus by their lawset wording I don’t need to state them, dick move I know but I didn’t feel like I should around him. Plus later I was subverted for an unrelated objective long after most of this but that’s besides the point).

He then resorts to attacking me with a stolen circular saw to which I tell my AI the situation as of course it makes good reporter news (I’m one hit away from being killed, never at any point did I harm him). He is once again arrested and weapons confiscated.

I continue to do my duties as a mediborg healing people, outside surgery room he peers in as I heal someone out of crit. He asks a cargo tech if they wanna team up in killing me after I’m done (I later joked with said cargo tech on how my assassination was coming along and they laughed it off as I healed him. A chill dude that cargo tech was and I gave him a free appendix for his bounty).

He eventually gets the door open and has another circular saw in one hand but forgets to lower his welding mask, so I flash him before he could land more blows and throw him into the psychiatrist office and tell the AI that he’s there and security can arrest him inside of there so I can go heal more people.

I eventually get triple medibeams and make heavy note not to cross them of course. I hear over radio that as soon as he’s let out of jail he attacks the warden a second later. According to AI he kept harassing the AI and the rest of the sec department overall. As round is about to end I’m asked by AI to make a forum post so here it is just as I’m about to go sleep. 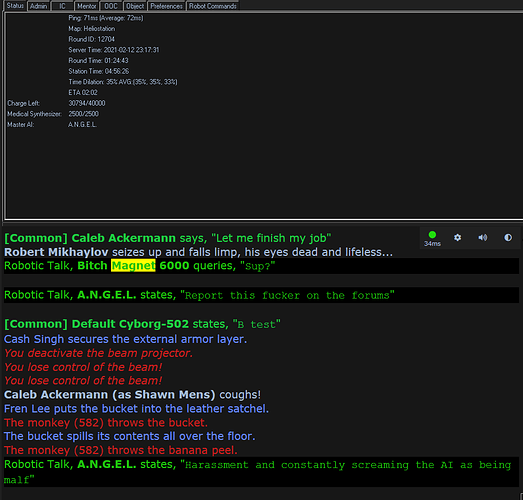 Some part of me feels like maybe I should’ve let him have those bodies and none of this would’ve happened? His behavior and over-escalation however was shitty and I’m mostly making this grief patrol at the request of someone other than myself.

I believe at minimum he stole at least 3 circular saws just to fuck me up. One he had from his first arrest, another when he assaulted me later and then another from when he tried to break into the surgery room I was in.

Backing my man up here:

This creature spent the better half of this shift harassing me via constant PDA messages, assaulting my borgs with at least 3 illegally acquired circular saws, resisting arrest and assaulting Security, screaming “MALF” every 2 seconds because I told SEC to arrest him for breaking the law, bitching about being arrested for breaking the law in common, and generally greatly fucking tanking the experience of everyone they made contact with this shift.

In other words: A very simple case of greytiding. Please address.

Adding onto this as it may aid the post.
Euclid has been genuinely… difficult to be around as during a round on Meta I was adding some more space for stasis beds, then Euclid comes along as the “Medical engineer” and starts shoving me around saying its “their way or no way” During this, they start hitting me with their saw and cut my leg off.
I did ahelp this but the CMO was handling it in round aswell so it was disregarded from an ahelp POV.
After this was dealt with, euclid would come into medical and constantly shove me around regardless of what I was doing. Considering how I was the only MD in medical due to them leaving to make a “private surgery” I found it extremely irritating.

I have looked into this, thank you for the report!