Grief Report : Bob weed randomly executing without warning, and without saying so afterwards

What happened: An hour into the round,non-antag, i’ve managed to get myself a power miner from a trade with a miner, and spent the round sending dumb lengthy pda messages to everyone about my adventures, gathering lamps and shit around the station. my power miner is a plasma one - but I had a fire extinguisher on me and was extinguishing people who happened to catch fire.

After gathering and placing my lamp loot for a ritual, I start writing another lengthy PDA message. Suddenly, a beepsky arrives, lvl 6 infraction. Weird, didn’t know power miners counted as weapon or some shit, i thought. Then, 10 seconds afterwards, arrives bob weed. He IMMEDIATELY starts shooting without saying a word, unloads a FULL energy gun of lethals towards me and bizz who were just chilling, has time to put his old gun in his backpack, type “sorry friends”, then start shooting again, meanwhile, bizz is just standing there going “bro what the fuck” and i’m in crit. He then unloads his second gun, gets us gibbed, then proceeds to say a single “wtf” upon seeing the gibbing and walking on the remains of the power miner (which still set on fire) before leaving. Doesn’t mention this in the sec chat or command chat. Doesn’t EVER mention he just carried out an execution out in the open, or even simply that he “caught an antag”. 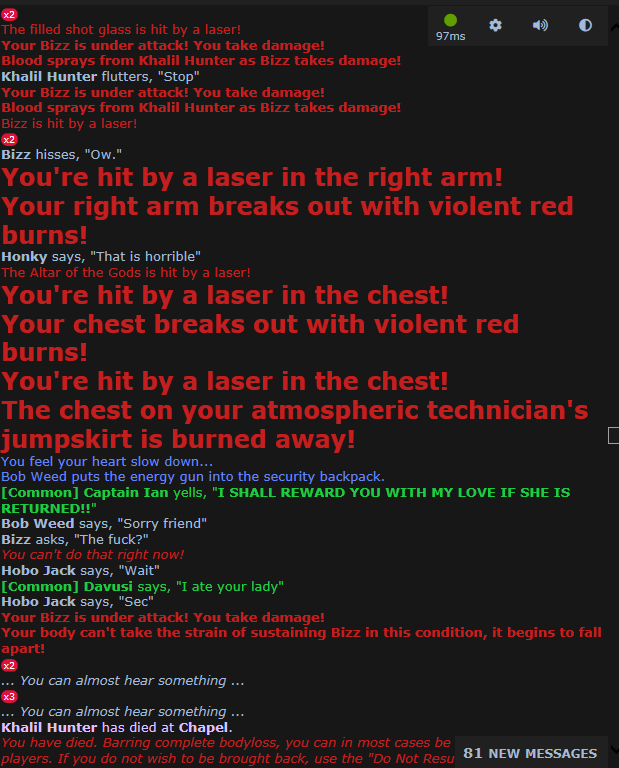 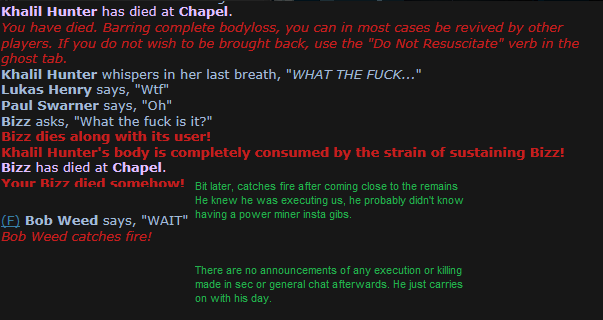 Hobo jack and Honky were not in the same room as us.

EDIT : Turns out they were arresting me and bizz over breaking down the door of the gulag in order to get the lamps inside of the mining area. They decided to crit us as a “preventive measure” because they were scared of the power miner. They crit me with the first energy gun- they saw that i was moving very slowly on the floor. We werent making ANY motions to attack. Yet he decided to empty another laser gun towards us.

Bob Weed has a problem with critting literally anybody they deem as a threat, and don’t tend to stop once spaceman is sideways. I’ve personally had to attempt IC cleanup of them more than once, and they dusted a memento user once too like JFC.

I was warden doing my job and he didn’t like it, so when he asked for respect I told him I didn’t have any for him, so he trapped me in a corner with his gygax and critted me. As a hos on a GREENSHIFT he had a gygax with guns. john got me back up and so he decided to shoot lethals at me and put me in crit again.

I have also made grief partols about him doing exactly this with traitor gear in the past.

I’ve seen him in-game and he’s overall a bad hos.