I would like to preface this in that I do not in anyway expect this to be approved. I simply do not believe I have the hours necessary to be a mentor yet. There is still so much I am learning about the game. However, I am interested in becoming a mentor and would like for my behavior on the server / discord server to be scrutinized, past and future, so that I may demonstrate my desire and ability to become a role model member of the server community. I’ve only recently started using a consistent character name and tried to take a more active effort to make myself a notable player.

How long have you played on Fulpstation? Started in August of 2020. 110 hours of living playtime.

What departments are you able to be a mentor for? Can you elaborate on your experience in those departments? Security and silicon are the only departments I have played enough in to be able to give solid advice to players on. I only recently unlocked AI and have 8.7 hours on it. Combined security department hours are about 35, 11 of those on HoS. It is very important to me to improve the reputation of Security players, and for my presence in a shift to improve the quality of it for everyone playing.

What are some things you’ve noticed as a player on Fulp? Fulp is the only SS13 server I have played on, but I have noticed that it seems to have a reputation of strict administration compared to other servers. I can only assume some other servers are Wild West in comparison. I’m not really interested in playing on other servers as a result, I appreciate the work the admins/mods are putting in and would like to contribute to the community as best I can.

Thanks for reading. I don’t think I’ve played with a consistent name long enough for many, if any players to have any feedback or testimonials to share about interactions/rounds, but I may be surprised.

Would like to add I played 5 solid rounds as Head of Security today, if that is anything to go by.

I don’t know enough about you to give a confident +1, but I have seen you being very active on the discord and your notes are great for someone with your time.

Always sceptical with mentor apps that have low hours (100 hours is a lot but I have no fucking life) however, I can say they’re cool on the discord. So +1

I’m iffy on sharing this for various reasons, but I had this interaction with a new player today and I feel like it is worth sharing. 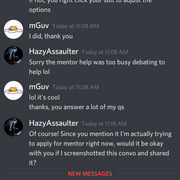 I also wanted to clarify that I am interested in becoming a mod at an appropriate time, if that wasn’t clear. The reason I said “potentially” is because I do not know if the staff is still wanting more mods at this time.

Hey, all. Apologies for the massive wall of text here.

I’ve been thinking about this application a lot (probably way more than I should worry about) over the last few days. I’ve been making an active effort to make an actual presence in the community, instead of the no-name I’ve been previously. I will continue to do this regardless of the outcome of this application. However, my conscience won’t allow me to (potentially) accept this role without ensuring the staff are able to make an informed decision.

Tom/Helianthus pointed out that my “notes are great for someone with (my) time”. That’s true, but I don’t feel like it paints a complete, accurate picture of my history. I don’t think it would be a bold assumption to say that there is a significant amount of rule breaking activity on Fulp that doesn’t get tracked on notes, mainly from players failing / opting not to report it. While the application and staff have not asked a question along the lines of “have you broken any rules we don’t know about?”, I personally feel that not volunteering such information is a lie of omission, also known as just a lie.

So, I’m just gonna rip off the band-aid and list every time I can think of where I straight up broke a rule that isn’t already on my notes. All of these events are from 2020, when I was both unaware of some server rules and Fulp culture. That’s not an excuse, it’s a player’s responsibility to read and make sure they understand the rules before playing, but I can certainly state that none of these actions were conceived from a place of maliciousness, trolling, or intent to grief other players.

From what I can remember:

I continued the round as normal, went to Engineering, asked an engie for evaluation. He agreed, again decent RP. It was pretty late into the round at this point, and still being unaware of self antag rules, I let my improve get a little carried. I told him I was diagnosing him with an overabundance of job-related stress… and that I was prescribing “mandatory fun”. I whipped out my disabler, shot him into stam crit before he could react, and managed to both ziptie and take off his headset before he managed to cry for help. Didn’t actually harm him in any way, which I think surprised him. I informed him I had no intentions of hurting him, and calmly explained that in order for the treatment to work he would have to trust me. I blindfolded and muzzled him, and then of course took him to the bar. After taking the blindfold off, showing him where we were, and asking if I could trust him not to scream, I removed his muzzle. I then proceeded to force him to drink copious amounts of alcohol under the guise of “Doctor’s orders”, and swallow psych pills. A clown and I dragged him around in a locker for a bit while he had an alcohol/drug induced episode. Shuttle was on the way at this point, so I took him back to my office and released him. He expressed great gratitude for showing him the ways of fun.

So, while the interaction worked out well, in hindsight it was done out of very poor judgement. I severely risked ruining another player’s fun by kidnapping them, an explicitly antagonistic action. I just lucked out that the other player appreciated and reciprocated the RP.

There you have it, all the undocumented, but unquestionably rule-breaking actions I’ve taken in my time as a player on Fulp. I am not volunteering this information to try to sabotage my application, or in some weird attempt to manipulate my odds. I would rather this post lead to my denial, than to have chosen to conceal this information and get approved. It’s not worth lying over, is all.

Sorry that this post was so long, but I wanted to make sure I gave as much context as possible for my actions in the past, and as to why I’m making this post.

This app has been accepted! Welcome to the mentor team