State your appeal: The ban message contains several lies. (Horatio22 confirmed with me
these were not mistakes, although I find this very hard to believe it is what they said when I
asked)

“Correct” ban message: (this however does not warrant a ban and is therefore
paradoxical) As acting Research Director, I wiped a not malfunctioning or subverted AI
despite having it in an intellicard because it resisted a legitimate attempt to card it by the
Captain, Research director and HoP with non-lethal methods and six different non-security,
non-command individuals claimed it was malfunctioning, as it was found to be not so, the
only possible conclusions were that six separate people were lying in combination, that they
had all made a mistake or that the AI was breaking its laws. The captain had previously given it a direct order to let itself be carded, it reenabled AI satellite turrets after they were turned off and activated the defence foam. An engineer had also attempted to card it and claimed the AI shocked doors to its satellite when they tried to do so, this engineer had not been given permission to enter the AI satellite , although the AI still (may have) committed harm against them. Original suspicion was about it claiming acquiring metal may cause human harm and lying about the purpose of the EVA reconstruction materials.

It should be noted that I was promoted to acting Research Director against my will, and was not even in the science department and was trying to coordinate the construction of a Blue-Space Artillery at the same time. I do not wish to be forced to try inform a member of non-staff that I have been banned while remaining in-character, which is what would be required if I was promoted against my will again while this ban is still active, although this is unlikely to happen. I had never wiped an AI before and I intended to have it cyborgised and slaved to the new AI to prevent further issues, however the shuttle arrived before I could do so. I don’t know why it never occurred to me to make an ahelp at the time.

Relevant images (limited to one image and two hyperlinks per post): (EDIT: moved hyperlink down one line because it was bugging me) 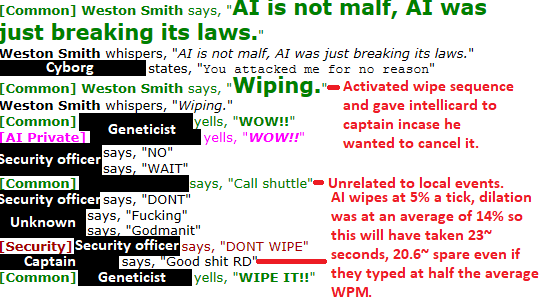 If this ban is not removed please at least fix the grammar issues, it keeps bugging me.

Hello this is Slig from Fulpstaion!

In this appeal you claim you where acting RD and that the AI was acting malf. The first part of this is already an issue because acting heads are not reaaal heads you don’t get to make the big calls like killing the AI. If you suspect an AI is just breaking it’s laws then you can ahelp at any time and admins will look into it and correct any issues happening. Now it’s time we look though the logs and see how everything went down.

image910×16 2.14 KB
You made an Ahelp earlier in the round so you where aware of the system and how to use it the message goes on but its of not real importance just asking about internet slang like wtf.

image1358×18 2.98 KB
Horatio was online answered the ahelp so their was an admin online at the time of round start.

image1572×23 2.86 KB
Getting tons of access that a QM doesn’t need because your goal is to work with the station and talk to people, then saying you’ll be building the BSA even though its not cargos job since that is the whole purpose of eng.

image777×24 2.19 KB
First interaction with the AI already super hostile
Then we get to the part where people start saying the ai is malf and the first mention of carding it.

Now here’s the interesting part an event called space dust was triggered which mean the station gets hit with some meteors not super huge ones just a light amount.

When this happened the toxins room was hit pretty good causing a plasma flood.

I’d like to add all these say logs are back to back these aren’t at different times in the round.

So I feel this is clear as day, your first interaction the AI didn’t open a door you didn’t have access to so you got more and more mad it till you started just saying its malf. Then spent the all round saying how the AI was so malf and crying wolf because it didn’t open a door for you. Your response was to go card it you saw its law and that iwasnt malf at any time then wiped it anyway. Its actually really interesting in this round you did engineers job the RDs job secs job and only half did your own job as qm only returning to cargo about 4 times during all of this because you were so busy valid hunting the ai for not opening a door for you. Your general toxicity to other players and staff is disgusting and we don’t have a place on fulp for people who are in it just to power trip and make other people mad/ feel bad so consider this ban as permanent you can try to appeal in a month. This would have been avoid if you have just made an ahelp if you where having serious and legitimate problems with the AI but you chose to take actions into your own hands.

TLDR: You called the ai malf for not opening a door for you convinced the crew it was malf by constantly talking about it played almost every job on station meta gamed about malf ai then valid hunted it only to find out it wasnt malf and you killed it anyway where toxic in game and on the discord now you’re perma banned.