Ban Message (Gyazo/imgur or copy and paste): banned for trolling as a peacekeeper borg then lying that victim was a friend.
State your appeal: i’ll be real with you here, i was having a blast playing with a friend until shit went down and both of us died, when that happened i grabbed a posi brain and when that happened i started to get bored and when THAT happened i started to mess with a lizard person grabbing and flashing them. so yeah i don’t know what to say, that was my fault and no im not saying im using im bored as an excuse, i did the mistake and i did it.

For context, here is the DM that I was sent immediately following this where he admits that he lied in the ticket to get out of a ban (which is itself perma bannable) 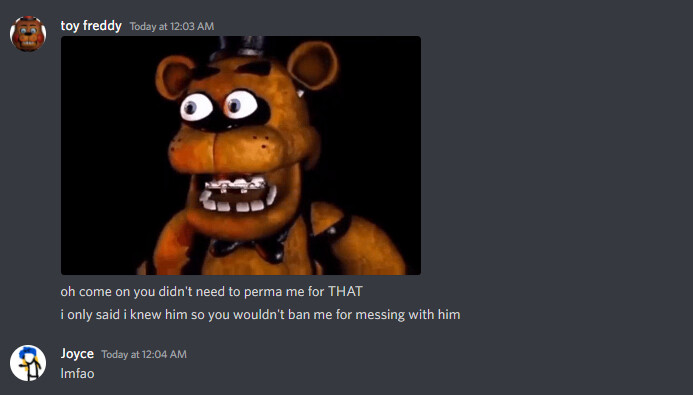 i did not know that was perma bannable fyi

OKAY okay look i fucked up in the server i’m not saying anything about that. that’s true i did it and i’ll own up to it but i’m telling you that the DM thing was completely out of my knowledge until you told me

wait… you’re talking about the whole lying in the ahelp thing and not the discord dm. GOD i’m dumb, right yeah my bad. the lying in the ticket sure okay that’s common sense, my bad. i did that because i was afraid you’d ban me eitherway, like imagine this is a telltale game and i have 4 things to tell you, each one of them would’ve resulted in the same concequence so i got scared and took the stupid lie way out

The best policy is to just tell the truth, we’re here to try and fix situations and enforce the rules. I understand it’s scary to outright admit to being at fault after an admin PM but it’s much better than being caught in a lie.

i suppose that’s true, yeah i apologize for freaking out and pulling a dumb lie.

I see exactly 0 good qualities you could bring to fulp or ss13 as a community. This is denied with 0 chance of appeal.