State your appeal: I don’t even remember what happened that round, if it was after the round ended then why was I banned for it. I just found the grief patrol post and now I remember, the HoP (who was acting cap) said to kill him and since they were acting cap I didn’t know if I should or not but the next thing I knew I had just massacred him.

This is a bit off topic, but can you explain what you mean by this please? 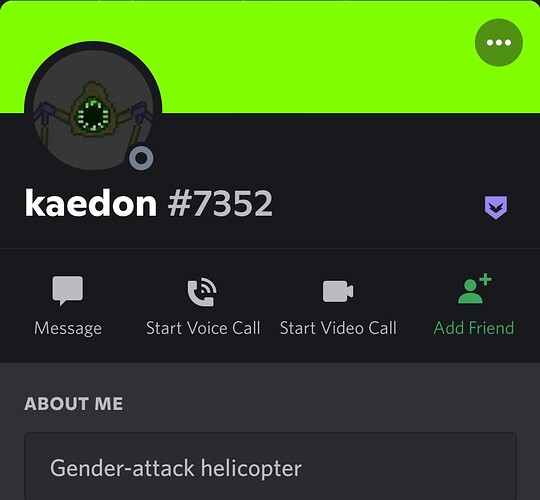 Can you explain the joke then?

its like your a helicopter but your not at the same time, its confusing

I Sexually Identify as an Attack Helicopter is a copypasta about a male who dreams of becoming a helicopter. It mocks gender and sexual identification posts by comparing the desire to be an attack helicopter with the experiences of transgender people and other LGBTQ+ people. The format of the copypasta parodies posts by transgender people about their experience, particularly those found on forums and blogging sites, most notably (Tumblr | Know Your Meme); exploring the topic by including references to social justice terms like check your privilege.

Okay, since you aren’t even attempting to provide some alternative explanation than the obvious transphobic joke, and considering your recent ban for calling another player a “fa–ot”, this is just clearly not the community for you. We strive to make a space that is safe and inviting for LGBT folks, and allowing someone who openly uses homophobic slurs and feels comfortable enough to be transphobic in their about me - something that everyone on every server you’re in can see- to stay here is not conducive to this. This ban appeal (despite being expired anyway) is denied, and I’m placing an additional, perma ban under core 4 for hate speech which you can appeal at a later date.