I started playing on Fulp last June & I have 420 hours as of this moment.

I am experienced & feel comfortable with guiding players around Medical & Security. I have 99 hours of playtime in medical & 83 hours on security. There have been a few times where I have seen newer doctors sign onto a shift with no real clue what they are doing & not have a good time because of it. It’s not fun to be useless in a department, especially when the bodies start stacking up. Another thing I’ve seen too many times is security officers not fully understanding the depth of the laws they themselves are enforcing. From security officers leaving prisoners in a holding room with no timer for more than 10 minutes, to wardens putting detained people in perma for small crimes. Having the extra ability out of character to assist these motivated & inexperienced players would be such a joy. This game has so much to officer to the individual player, and the fun experiences gained by players coming together with just a little more knowledge under their belt only adds to a better fulpstation experience.

One thing I have noticed is that the community & culture of fulpstation is strong. This is a mainly contributed by the environment that the staff team promotes. It’s a good server for newer players to learn the ropes, as the staff team understands that people make mistakes & are happy to educate you on what’s right vs wrong if you show that you are willing to learn.

As an end note, I have been on the bad stick of player behavior in regards to security roles. However because of this I can easily recognize this type of behavior & easily assist fellow security officers in fixing this if they wish to learn. I’m not proud of the bad experiences I have given other players, however with assistance from the staff team I feel comfortable with what you should & should not do while playing on fulpstation.

So, I’ll start by mentioning certain experiences in a personal aspects, and shouldn’t be taken as part of my general opinion on this mentor app.

1 - Me, as warden. You, latejoining and instantly SSD’ing in the Security office, a target for easy looting.

And a few hearsay:

3 - Lethal’ing a mime for having contraband.

4 - Abusing a prisoner who had fire sweat and radioactivity (from a radiation storm).

5 - Validhunting a friendly wizard as a shaft miner.

As for one situation that presented itself (Around ends of February): 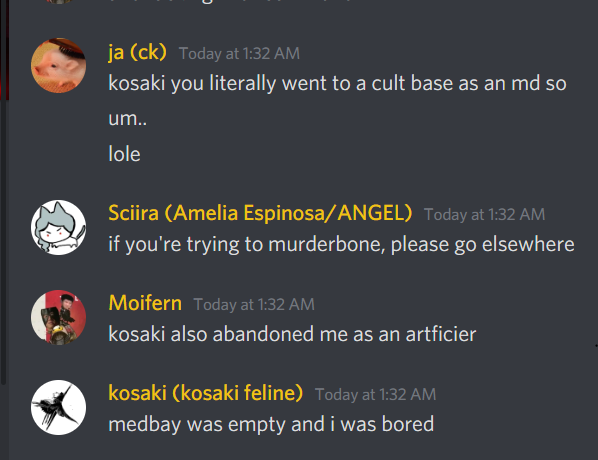 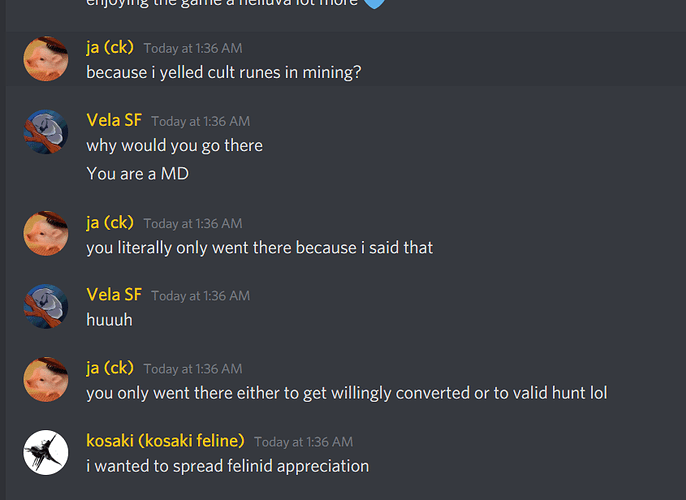 Furthermore, I personally find it annoying the start of the ‘A good X round!’ in #compliments. Which was started by you spamming “A good felinid round! Thank you fellow felinids and felifriends! Felinid appreciation was spread!” every single round you played on.
I also dislike your defining trait being, quite only, “felinid player”. With your name being earlier “Kosaki Nya Owo”, with semi-constant felinid chat.
Hell, it got so bad to the point that, you, as Captain, got mutinied due to uploading felinid laws to the AI. You even made a grief report about it. (Grief Report : Command staff for inciting an illegal mutiny)
I don’t commonly see good interactions.
On someone’s else’s words “this is why felinid players are frowned upon”.

I don’t like to hate, but I have to say that my concerns are basically the same as Pucci’s. However I wanted to point out that it seems like you acknowledged this past behavior in the last part of your app, and I think that there is no harm in giving you a chance, in my opinion. I can’t really -1 or +1 this, so I figured I would add my two cents to the discussion.

Got quite a bad history about this player about AI laws and head big responsabilities.
However he’s a competent CMO, his lrp behavior tend to protect a lot his departement from lrp shitters and tiders which is helpful.
In the whole (other departement) he seems to be a good player when he have something he must do, not quite when he take decisions, as Pucci pointed out it.
I want to give him a chance to temper his behavior inside the mentor gang ambiance so +1

For now, we are going to sit on this app to keep a closer eye on things. This will be re-reviewed some time in the future.

yin819×23 2.41 KB
If you put in a mentor app you’re put on a watchlist so we can keep track of how your rounds go to see if you’d be right for mentor we look for the applicant to be following community guidelines having positive interactions with other players and aid in problem solving. When you put in this app and Pucci put feed back about overly obnoxious felid RP where it ruins rounds or skirts rules that should have been your indicator to take it down a notch he is not the Head of pseudo staff as a meme he is in charge of mentors with this recent erp bait happening just an hour or two ago and this app being 2 days ago we can see the feedback was largely ignored

TLDR: Denied due to ERP bait and not being up to mentor standards