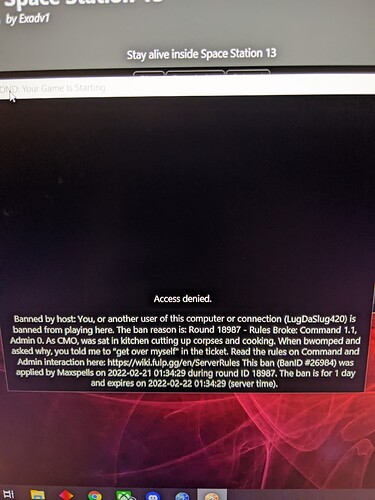 Hello there id like apologize and repeal my ban from last night as I feel the actions in game were not against rule but that my response to the admin ping was uncourteous and rude and was not handled in the manor I should have. id like to apologize to maxspells for that I was under the influence of liquor and was having a bad day when I told him to “get overhimself”. That being said I believe my in game actions were following roleplay and there were no actions harming other crew members. The actions I was pinged for were going in the kitchen to cook a husked body as roleplay lore had been established by the A.I. that I was a cannibal I thought it would be funny to indulge without hurting any non husked crew members and I spent very little time actually in the kitchen. Prior to this I was fufilling my dutys as cmo by getting cryo up, improving the operating room, and doing research for the medical department. After I had finished Eating an arm or two, I returned to medbay and continued to do my dutys until the ban came through.

1 - it’s not the CMO’s job to cook things. If you wanna do a cannibal RP (which you shouldn’t be doing this if the body is recoverable- husked bodies are sometimes recoverable), you need to interact with other people and get them to help you, not just bust into other departments and take over for your gimmick. Again, something being a gimmick isn’t grounds to break RP/ command expectations. This would be a problem if it were a paramedic doing it let alone someone who is meant to be command and running their department

2- a 1-day ban should be enough time for you to sober up and read over our rules. It’s also much shorter than what our standard banning progression is as the minimum ban duration is 3 days.

This is denied. Feel free to rejoin the server tomorrow when you are sobered up and ready to follow the server rules.