How long have you played on Fulpstation?
Look below! 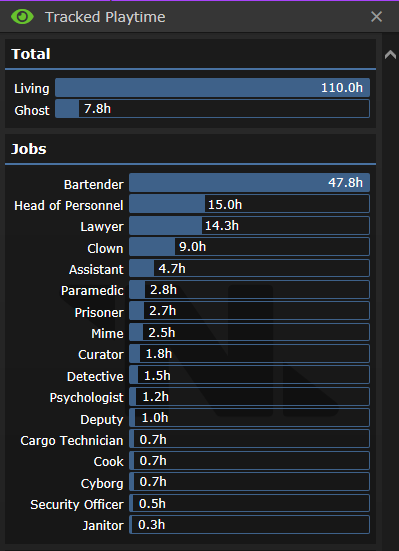 I’d be able to mentor service pretty well considering the amount of time I’ve put into being a bartender. I’ve got bartending down completely, and I learned a lot about the other aspects of service being one!

Cargo is essential for making some big bucks and keeping the entirety of the station satisfied with their deliveries. The chefs has taught me a few things here and there and are incredibly more important than they believe at keeping the crew fed. The bartender can really give some sly buff advantages to people depending on the drinks they make. Clown and mime can be a LOT more robust and entertaining than they initially may believe. Botany can play such a critical role in how service runs period and sway their course. Lawyer can really make a difference for an antagonist, or make things entertaining for the crew with Space Law. Chaplain can really have a fun time depending on what they make their religion, and are REAL important for cultist rounds. Curator is the most underrated role in the game with their exhibits and adventures they can go on, and and wildly robust with a whip. Finally assistants can actually pick up some mad gimmicks if they’ve got the motivation! (Also, forgot to include, psychologists can actually assist people with poor mental health, keep them stable, and buff them back up from being a slow, sad sack 'n keep 'em company.)

Due to the time I’m putting into Head of Personnel I think that I’ve really gotten a grasp on how service really plays and interacts with one another as a department, and with other departments. I give assistants tasks to do, fun little gimmicks, contact heads to see if they’d like any new interns, and learn a lot about command in that time. I hope to eventually become Captain and manage the ship and heads once I really get the hang of things!

People can be incredibly helpful and teach you a lot if you just give them the time of day and talk. Some people like to really get into the roleplay aspect of their position and have a chill time, which is nice! Some people like to really be tactical and once they get any sign of antag activity, they prep for it and don’t care for roleplay all that much. There’s the people that really don’t care and love to shitpost their position which can lead to some pretty funny experiences that I’ll remember.

Notably, the admins are pretty responsive and forgiving if you just explain yourself and are really willing to help those out that need it. Every time I’ve seen a problematic individual in the server, I have never seen them, or that behavior from said person, again since then. It really feels like it’s a positive, fun environment. Yeah, there’s rules set in place, but they don’t feel restricting all. It’s nice seeing a familiar character or face around the station and sort of having that metafriend energy going on.

You’ve been great on the discord and in game. You have a very good HOP rp where you’re responsible with the access you give out, and have shown a good understanding of server rules. We’d like to see you playing more departments outside of service but that’s some thing that will just come with time! Application accepted!