Byond Account: SimplySmiley
Character Name(s): Kashik-Dum; Paduxi-Dum; Luna Spark; Narash-Lon; Miri-Mari
Discord Name: SimplySmiley
Age: 20
Timezone: GMT+2
Active hours: It’s all over the place, but most consistently at late evening.
Are you interested in becoming a mod?: Not really. That would be too much responsibility for me. 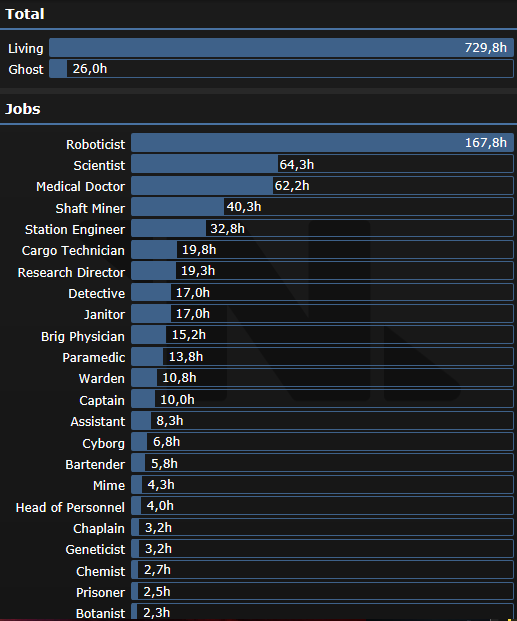 image517×621 17.4 KB
After some update all my hours of Deputy playtime vanished, but they were in similiar number to my Roboticist hours (above 150 hours).

Science
I know ins and outs of robotics, how to construct mechs, bots, how to maintain cyborgs alongside how to perform surgeries most often used in robotics as well as what to not do as Roboticist (such as making RnD consoles without permissions from command / RD / acting RD or making only mechs for yourself to grief).
When it comes to normal scientist, I feel most competent in terms of Xenobio, how to optimize slime production, what slime colours will result on mutation, which extract does what alongside what needs to be scanned for which survey and how to operate the scanner. I as well know what to not do as Xenobiology (which includes things like bombing places with oil slimes, golem / mob tides) as well as what can be good ideas to do (for example providing security with buffs, paramedics with stabilizing extracts or helping with toxins experiments with oil slimes). I also know how Experisci works and the Experimentor and how to avoid getting blown up by Strange Objects.
Genetics I know what’s needed - what does what, how to deal with monkeys going wild, how to efficiently use the console alongside what each mutation does and which are good.

Security
Deputy is one my most played roles (around 150 hours) and thanks to that I have knowledge of how to behave as Deputy and what are your duties as one as well as what to avoid and how to activate and use the Block Chance provided by the skillchip.
I have good enough knowledge of how forensics work and how to help identify job of a suspect of their identity with fibers, prints and blood samples and where to check which between security records console and medical records console. I also do know what Detectives should (respond to calls from security to scan evidence) and shouldn’t do (act like security officer with a gun).
From my playtime as Warden I have a decent understanding of Fulp’s Space Law and how to treat prisoners alongside what your duties are (guarding brig, keeping prisoners in check, monitoring the statuses of officers, handing out equipment accordingly to the threat present) and what aren’t (acting as security officer, neglecting prisoners and officers) as well as how Krav Maga works and what equipment is better for certain situations (bulletproof vests for threats that use guns like Nukies; riot gear against bloodsuckers, cultists and such)
As Brig Physician I know same things as with medical doctor - how to patch people up effectively and fast, what is useful for what - but also how to expand the medical area in brig, how to make it more effective as well as how the beacon works and what each of the options contains.

Medical
As doctor I know basics and niche nuances of surgeries, how to perform your work efficiently, what does what and how to effectively keep people away from afterlife whether it’s problems with toxins in their blood system or simply wounds from a fight as well as how to operate niche medical machinery like organ harvester or limb grower, as well as how defibrilators work and what to avoid when using one.
From playtime as paramedic I know what they are required to do and what they shouldn’t do without a proper emergency. As well as how to use equipment provided (and which can help further) to find dead bodies alongside how to preserve the body from organ rot.

Service
I know basics of bartender’s job and how mixing drinks work and where to find certain ingredients for more exotic drinks.
From playing Janitor I know what does what in fighting the filth of the station, what items are good for what, how janicart operates as well as how to use janitorial equipment for self-defense.
As chaplain I know how the favours system works, mostly where to find what’s required for the sect and what each sect does.

Cargo
I have decent knowledge of what each order contains and which ones are useful for what, as well as how to perform more specific things like using the mail system, how to operate a mule, how to deal with bounty cubes, as well as effective methods of gaining money alongside how Black Market works. I’m also well aware of what things you shouldn’t be doing as Cargo without a proper valid reasoning, like ordering guns shouldn’t be done without proper command permissions and equivalent threat.
When it comes to mining I mostly know how to mine effectively and what’s useful for mining specifically as well as what some ruins do and what to avoid on both Lavaland and Ice Wastes on Icebox (as well as what is useful for what, like coffe for dealing with freeze effect from watchers on both lavaland and icemoon). When it comes to fauna however I only know how to deal with simplemobs and Hierophant, I’m still green to the rest of the fauna.

Engineering
My only experience with engineering is working as Engineer and fixing breaches which include patching up holes, replacing piping, replacing wiring, fixing/replacing machinery and doors and how to manipulate door’s access when constructing as well as how to hack through doors and what to look for. I mostly know how construction works and what to do with station objectives and where are the best locations for them.

Command
I’m mostly knowledgable of how to work as RD, what to look out for, what should be the priorities when it comes to research, how to deal with malicious actors in Xenobio, Genetics and Robotics (and by extension how to manipulate access as RD) as well as how to deal with AI and whatever problems it may have or cause.
From playtime as Captain I’m knowledgable in how lawsets work, what to not do with them, what to do with terrible heads of staff and what your position is in relation to everyone else and when to agree and disagree on executions, borging or permament incarceration.
From short playtime as Head of Personell I have knowledge needed to operate the trims system, what card is needed for what trim and in general how to deal with whatever access manipulation is needed. As well as how to set a job to a priority or open new slots for the jobs.

What are some things you’ve noticed as a player on Fulp?
That the community is way nicer then it’s said to be. There’s quite a lot of helpful people in this community.

-1 doesn’t have 100 hours in prisoner. +2 is good with fancy shmancy robots

is a cool guy