I have a rather erratic sleep schedule that causes me to be awake and asleep during inconsistent times, which was part of the reason I was a bit hazy on wanting to apply. Some days I’m going to bed at 3pm EST and some days I’m waking up at 3pm EST.

On top of also still being in university which will also affect my online hours. I do play ss13 quite a bit as my main pastime outside of university or work.

If I do take/plan to take a long break I will ask for a retirement as other moderators/admins have done in the past. This will be typically because of university/work.

How long have you been a mentor? (Note: only current mentors are eligible to apply for mod):

Do you have prior experience being a moderator:

I’m a chat moderator for summit1g and have been for the past 6 years and counting, a channel that gets anywhere from 10k-40k live viewers at a time. Along with also being a moderator for a few other twitch channels/discords, I used to also moderate for various (now defunct) gmod/tf2/minecraft servers in the past.

What is something you feel you do well:

Whenever I do answer mentorhelps for someone new to something such as a certain antagonist or a certain role (that I’m familiar with) I try to stay with them every step of the way (sometimes even making myself a ghost if I am a non critical role and observing them) to make sure all their questions are answered. I’ve guided people through being a traitor and plans of completing objectives from start to finish and while alive have been known to stick with people until they feel comfortable being on their own. Typically this is with janitors most of the time as it’s a newbie-friendly role that’s easy to pickup but takes time to know how to play to it’s full potential.

(This admin note/remark was given before I became a mentor):

Aside from what I know and do as a mentor, I am active on the forums and understand/keep to date with server rules. If I ever do break a rule it’s always unintentionally. Should I ever get an admin message about a situation that involves me I’ve always have been polite and have never attempted to bend the truth. If I made a mistake or mess up I admit to it right away, sometimes I even ahelp that I did something against the rules before an admin even bwoinks me about it. I have absolutely nothing to hide from administrators or staff when playing the game. My note history reflects this, is mostly clean and is in the single digits.

Any time I play with friends (gf, classmates, coworkers etc) for the purposes of showing/teaching them the game over a voicechat? I make it very clear to them that I will not be sharing nor wishing to hear metacomm information and am solely there to help them get comfortable in what’s typically and overwhelming game at first for some/most.

I also tell staff immediately (via ahelp) if I am playing with someone over a discord voice call, I make it clear no critical round information will be shared among us both and I’m mostly there to provide them answers to their immediate questions (ie: how do I charge baton?).

As you’ll see mentioned in an image near the bottom, I make sure to familiarize myself with server/discord/forum rules frequently. I have no objections to server rules, though as others have noted there are some inconsistencies in certain rulings whether due to a game update or a recent rulechange. Any time there is an update to the rules I make sure to read up on it and keep up to date as I hate to break them because I was going off of older rules.

What is something you wish to change:

While my sleep schedule is quite a bit erratic as I mentioned before, it currently aligns with EU hours (which is when we have little-to-no moderators) and is why I’ve been filling out so many grief patrols. I hope to at least fill that gap until at least we get more EU moderators.

When my sleep schedule eventually becomes so broken it returns to regular NA times for me? I’ll spend much of my time on these forums as I already do. We have a lot of people that are saddened that it takes days for their grief patrol/ban appeal to be answered. I’m hoping that by becoming a moderator I can reduce some of those wait times.

Endorsements from past/present fulpstation staff (with permission to share) wouldn’t have applied otherwise if it wasn’t for these messages (not including all mentors being told to just apply for moderator to reduce the “redtide”):

When asking if I can use the above in the future for a mod app: 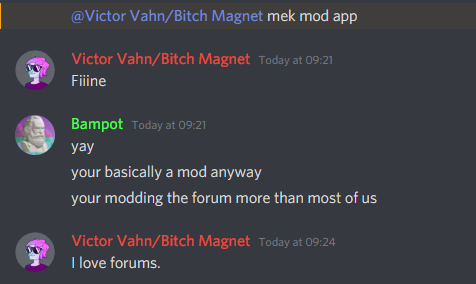 I’m kinda neutral on this- on one hand, you’re great at spotting rule breaking behavior and have a pretty solid history with following server rules. On the other hand, I’m a little concerned that this is, I think, the 3rd time I’ve had to ask you to not make peanut gallery comments on ban appeals.

I expected this to be your response and I don’t blame you for it. In fact it’s good that you brought it up! I commented on discord that I tried to provide insight on a ban appeal because “hey I was there, you did this”, but of course then realizing (and also commented on discord) that would just add clutter to the appeal and would be the response from staff regardless at the end.

As I said I’ve tried to not make the same mistake twice or thrice, the past time(s) have been for grief patrols and been basically told to not reply there unless I have critical information if I was in said round. I tried to apply this logic to ban appeals but as I’ve said earlier just adds clutter and you’re right to call me out on it.

If I don’t get accepted as a moderator it’s no big deal, as I’ve said I’ve been mostly applying to reduce the “mentor redtide” and because I’ve been directly told (a few times now) and privately “you should apply for mod already” from other staff. If I stay mentor I’ll continue to follow rules and make it clear not comment on ban appeals, period. Not commenting on ban appeals is a rule (albeit unclear to not just me as it has to be told to others and the rule is in discord instead of being listed on the forums) and I want to maintain my reputation of following them regardless of what level of staff/user I am.

We would like a week or so to think on this one. Expect this to be reviewed then.

Active in the community, level headed, and fairly competent. +1 for me.

Admins have discussed this one a little further. We have some concerns that we’d like to talk with you before we grant in-game perms, but we’ve decided to accept this. Welcome aboard!