Early shift xenos, the drone pops into medical and dies. An engineer named Jeff Jeff(something) wanted brings up a brain transplant, and as CMO i asked the captain, who approved it. We revived it and had a crew aligned queen, lovely. 50 minutes go by with only very minor problems (one hunter decided to impregnate someone and they were handled with an ahelp as the queen was giving clear crew aligned orders), and one drone was making resin outside of the agreed upon border of virology. The CE is either let into, or broke into virology and announced his becoming aware of the project we had done. 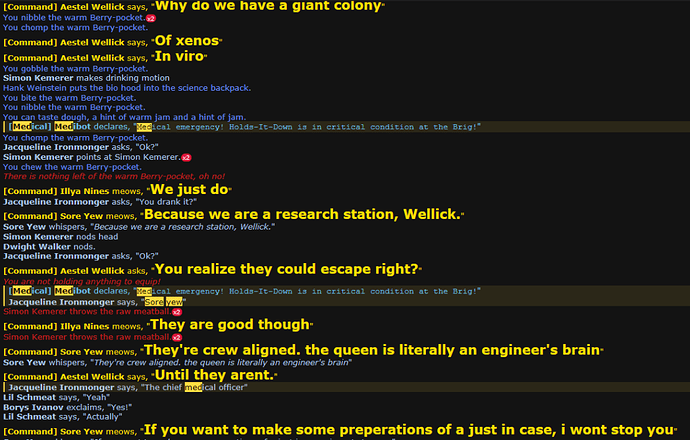 At this point im at the bar getting food, any by the time i get back he makes this accusation of that same drone pulling a morgue corpse.

This is that botanist that they didn’t kill. Which led to this exchange: 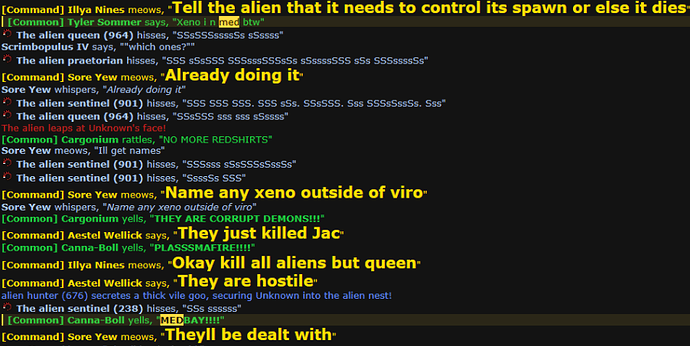 902×453 160 KB
And before i could even say anything else, the CE busts in and begins torching the place. Notably we had just gotten the queen aware that one of her babies was violating orders, and that several crew including the CMO (me), a curator, and a seccie were inside virology. Even after seeing that we are burning and that the xenos are moving back as opposed to attacking he continues to torch the place. I move him back to the previous room and he continues to light me (no xenos around) on fire until im downed because im trying to stamcrit him. 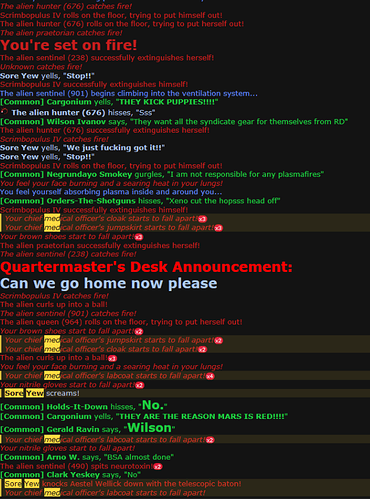 619×835 220 KB
I dunno the admins ruling on the whole queen situation, since Jeff im fairly sure isn’t an antagonist but i don’t know about the xeno babies so i didn’t list the ones that were breaking the whole event. The CE however clearly murdered everyone in viro because “must valid xeno”

edit: i found out after the round that the rogue xeno also attacked an officer but didnt kill them as i was with them until we went into the viro chamber and left after the CE burned us.

Oh wow when you said the CE killed a bunch of people I thought it was the CE who was brain transplanted into the xeno.

I’d like to add that i was standing between 2 xenos in medbay talking to them and hugged them, didnt do any harm to them, then one of them tackled and started slashing me/dragging into the hive so i called/screamed for help.
The CE was trying to save me kill the xenos (tho he burned me to a crisp), i guess he and i didnt even know the queen was a transplanted crew member.

This grief patrol should be mostly targeted at the xeno disobeying the queen cause it’s against the rules, and he broke them on purpose and talked about betraying the queen so they could go murder bone.

Currently looking into this patrol, it seems as if there was some foul play from a few aliens disobeying the queen ontop of other rule breaking behaviour before some of them took the larva spawner. CE made mention that HoS aka @twtwetwe was attacked/killed by two aliens (which is true, already saw this earlier when checking logs) before going full lethals with a flamethrower.

This is going to take some time to go through all of this as I intend to finely comb through all of the logs of everyone involved but rest assured it is being handled, I intend to leave no stone unturned regardless if it’s mentioned or not. Regardless, if any of you have any more details feel free to mention them and I’ll take a look (assuming I haven’t already). I’ve already noted/investigated a couple players involved and am still checking others that were involved.

Edit: Passed most of what I have to other staff so they can handle it.