Apparently i was killing people, destroyed SM and plasma flooded the station by your line of thinking. First things first i was trying to save SM i even builded n2 pipeline to SM and even i told in comms that someone sabotaging SM. I failed to save sm cause someone from engineering has been sabotaging scrubbers and vents. I even died from explosion, thankfully i was a ling so i revived myself. As half of the engineering was missing, i had nothing better to do but to complete ling team objective. I replaced 80% N2 and 20% 02 with 100% plasma to station feed. I get it i kinda deserve schooling for that, but you put it like i plasma flooded all of the station. I only flooded atmos which been already destroyed and no one was there. The only bad thing i did i flooded two hallways vents, which only flooded and was on fire like for 3 minutes, cause i don’t know how to plasma flood. Whole that round was afterwards without plasma fires. I told you, i wanted to learn as antag, but you said read up on wiki, in response i told you you can’t learn on youtube or wiki all servers have different learning curves, only by doing something you can learn it. Then as every admin in the word you said read up on the rules, basically saying don’t be creative or experiment. I care little for this ban but it’s keeps me pissed off than people make stuff up about the others to make himself look good by exaggerating other people’s minor mistakes. I could ignore this but imagine if someone truly did something bit worse and get perma ban. Next time please do more investigation and inform a player if his getting ban please. I can wait it out the bad.

that being said i do agree that doing is the best way to learn. i don’t know all the context of this ban and won’t comment on this as it relates to the ban but if you want to learn how to do stuff without the threat of being bwoinked, try running the server on your local machine. this allows you full admin access so you can spawn yourself as antag, blow it up, no one will care. great way to learn solo antag and job roles. 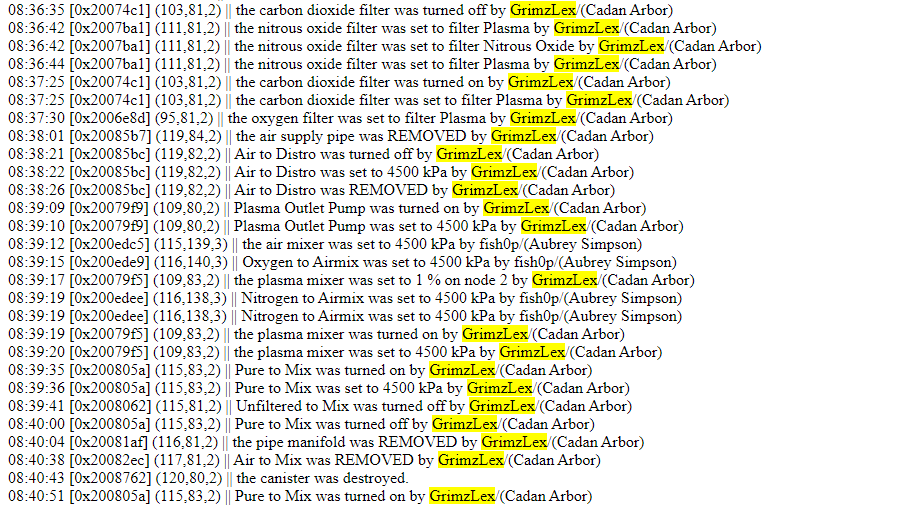 then here was your objectives

Plasma flooding part of sec the main hallway and atmos has nothing to do with these objectives and causes massive damage to the station since youre going to get these super hot areas with no air that no one can go to. Learning to play ling is one thing but we don’t let antags nuke parts of the station for no reason since its just RDM.