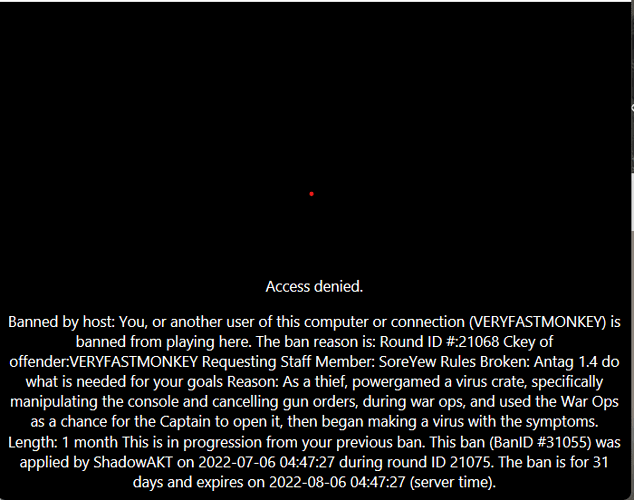 image700×552 40.7 KB
State your appeal: i canceled the gun orders because the bartender was spamming gun crates, we at the time could not afford which clogged up the machine and nobody could get anything also buying the
virus crate had nothing to do with me being a thief i bought it because i was a virologist and needed it to make healing viruses and use the preexisting viruses as bases for good viruses then i went to captain because he was in med bay and he opened it for me i couldn’t even have made a virus once it was opened because power went out and machines didn’t work then i attempted to kill myself with the bee virus and was put in centcomm jail because i was trying to spread a virus even though i was locked in virology and to add to the part where im accused of making a virus with symptoms you must not understand virology because thats my fucking job
VERYMONKEYFAST July 6, 2022, 10:22pm #2

Ordering a ton of guns is pretty standard on nuke op rounds, and you didn’t have any right to cancel those orders as a virologist.

Also, you ordered and then released a ban virus, which is against the rules. Considering your ban history, you are lucky that a jr mod handled your ticket or it would have been a straight permaban.

This is denied, obviously.