Before Cult had halos, I walked into 2 separate Cult bases and had found tons of gear which I expected them to go loud with. I held a cultist longsword in my hand as I delivered mail, and Holden Costello the Assistant walked up to me in Medbay as I was handing someone their mail and began to attack me with a circular saw, to which I responded by throwing cult daggers at them. Alessandra saw this from the Chemistry lab, ran outside to beat me to death with a baseball bat, then dragged my body into the Chemistry lab for, in their own words, “We’ll use him as test subject for our grenades whenever we’ll come around doing that”. They didnt bother letting people revive me so I can get “Deconverted”, when Cult still had red eyes, so no reason to roundremove by this point.

They also said this a few minutes after killing me, I don’t know what they were thinking of when they wrote this, my first assumption was “They know I wasnt a cultist afterall but they need an excuse as to why they killed me”, but I can’t be certain on that, especially because of things they said afterwards.

I was later dragged by the other Chemist to Medbay central, where the Doctor put me on stasis to revive, and this is what they said when they realized I didn’t have glowing red eyes; 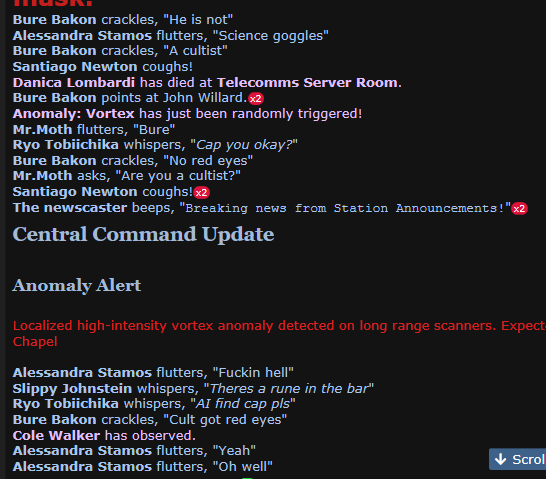 And later, when I was revived, I saw them still in Chemistry lab. They threatened to murder me again, showing no remorse for having killed a non-antag, so out of plain spite I repeatedly threw cult daggers at the Chemistry lab windows, when this happened; 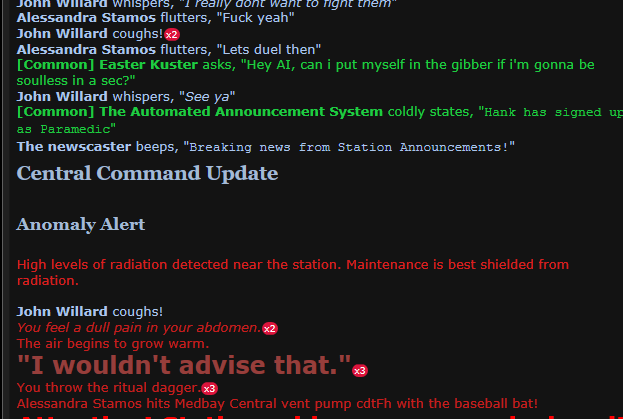 Explanation: They said they wanted to duel, I whispered to the nearby Doctor that was watching it unfold that I didn’t want to fight, and started to leave before they began to run at me with a bat, so I, again, started throwing daggers, this time to get them off me.

While them attacking me with a bat could in some way be justifiable here, as I was breaking their windows (The other chemist suggested calling for Security, but they never ended up doing so), they consciously decided to beat me to death, far beyond crit, even when they were sitting in the middle of a radiation storm, they kept beating my hardcrit/dead body instead of get to maintenance.

I’d also like to add onto this, that they make grenades many times, despite it not being their job. I’ve seen it three times now, but the only round ID I have is 14794, where they made a bomb, then used it to gib themselves once xenos found them.

They also used it on me during my Monster hunter round a few days ago, same grenade, gibbing + causing a hull breach, but I dont have a round ID for that

Taken care of, thanks!