Aubree Smith - Ruining a cult round as Cultist

After we converted them to Blood cult, they punched me repeatedly while telling me to go fuck myself (or something along those lines), and told us they were going SSD.
They didn’t go SSD, and instead left the rest of the Cult, not having taken anything cult-related, and next I saw they were in the Brig teaching security how to deconvert.
They said several things about hating cult, including to security, and later on in deadchat too when they said they ‘dont care’ about having ruined the round for cult by selling us out. 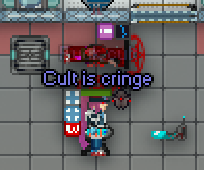 At the time of them being converted, we did not have halos. I assume that’s also the case when they were arrested by Security, because we didn’t get it until way later.

The rest of the cult instantly assumed they left to go tell Security about their conversion. Not sure if this is 100% what they did but it looks like such from the perspective as the converter.

Dealt with, thank you very much.