I was a Bartender, we were two of them that round. The other bartender took the double barrel shotgun, so I did bounties and bots to make enough to afford my own. I first wanted to get disablers, but then changed my mind and bought a Combat shotgun instead. This shouldn’t be a problem, I thought, Bartenders are allowed to have a gun, Security has no business in what I do with my gun as long as I don’t have lethals, which I don’t intend on having.

Enter: Axle Brady. He asks me why I have a combat shotgun, and I told him that it was my shotgun, and unloaded it onto the floor to show that I had beanbags in it. He ignores this, and runs at me with pepperspray. I, not wanting to go blind, start running. I end up going down disposals twice until the Head of Security thows a body at me to stun me, and Axle arrests me.

I start explaining again, that it’s my shotgun, and my weapon, yet Axle ignores me, telling the HoS that I had the ‘Wardens Shotgun’ (Wardens???). While the HoS agreed with him at first, he told Axle “He bought it, so its legit”. Axle completely ignores this, and brigs me anyways. 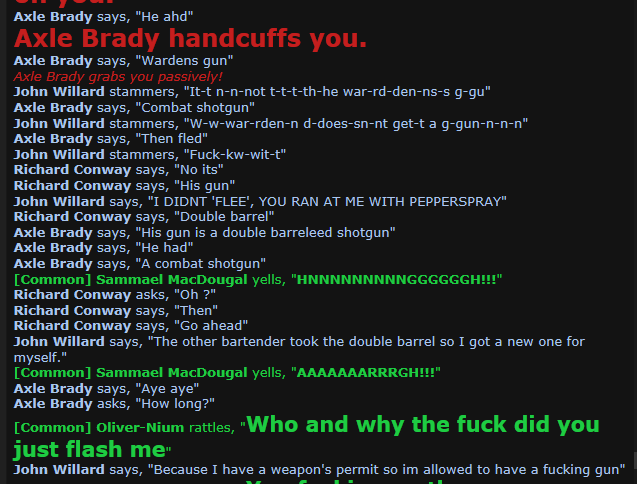 Later, in the Brig, while I wait for my timer to be given and me to be left alone, he decides to mention that he’s doing this personally against me, ock icking about how ME having a shotgun as the bartender is powergaming.

He continues this conversation for a little longer but I didn’t screenshot it. He specifically brings up how he ALSO has a weapon’s permit, but isn’t allowed a shotgun (Admitting that he knows Bartenders have a weapons permit, and even says himself that him having a shotgun is powergaming, despite him getting a sawn-off shotgun full of improvised shells nearly every round…)

This is despite the fact he himself had also purchased tools from cargo, a Combat knife. Though it seems he had no problem with that.