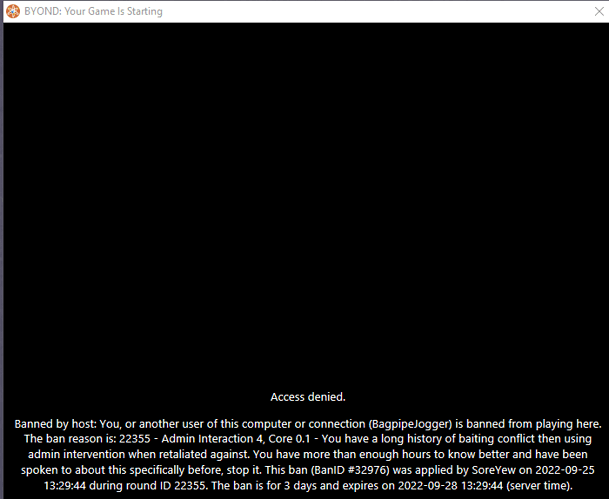 To preface this appeal I’ll go through the events from my perspective that led up to the ban.

I was doing bounties for cargo and took a bounty for a monkey hide, so I went to the kitchen. There’s a monkey already dead on the floor, and so I climbed the counter at which point the cook immediately rushes at me and strikes me, I put myself behind an invisible wall and gesture peaceful intentions to him and then point at the door as if asking him to open it for me. He drags the monkey towards the cold room and I move to stand outside the door waiting for him to gib it so I can ask him for the hide, Instead of either gibbing the monkey or letting me out he stabs me, I retaliate to by shoving him and taking the monkey, putting up another invisible wall to prevent him running me down.

After going to medbay to get healed, I considered that they may need to do the dissection experiment on it and could butcher it for me afterwards, but seeing that the doctors were too busy I left the monkey there and returned to the service department. I saw the other mime at the kitchen counter and approach him to warn him that the cook is unreasonably aggressive, but he immediately rushes out of his kitchen to stab me, dislocating my arm. This leads to chairs being thrown back and forth and the cook trying to get me into the kitchen so he can CQC me, which he almost succeeds in doing but again I manage to save myself with an invisible wall. Unable to pursue me, he screams for security claiming that I’m trying to kill him before being dragged away to medbay (not in crit).

A while later I’m watching a security officer getting murdered by a syndicate agent when the cook approaches me again and asks me why I attacked him, to which I repeatedly point at my injuries which he claims he did in self-defense, despite having stabbed me on two separate occasions prior to me doing anything to him. I find this very annoying and so I try to grab him and shove him into the nearby disposals chute. This leads to him to grab a toolbox from a nearby emergency locker but failing to hit me with it.

The reasons for me Ahelping are the events that follow:

After failing to hit me with the toolbox, the cook rushes into tool storage and grabs a welder and a fuel tank, turning the welder on and rushing down the hall at me with the fuel tank in tow. Whether rethinking his actions or realising he won’t be able to get close enough to me to do more damage to me than himself, he runs back up the hall with the tank. I’m not sure where he took it.

There’s a brief period after this where the cook and I throw glass shards back and forth at each other in the dark.

A short time later the other cook approaches me asking me for my bottle of nothing, I respond to this by refusing to provde it to him and pointing at my stabbed and dislocated arm which he offers to fix. He grabs me and he other cook sees me being restrained, taking this as an opportunity to stop what he was doing (Seemingly beating someone else to death inside the kitchen) and again leave the kitchen to attack me. His co-worker who was trying to fix my dislocated arm then states “Oh, I see” before they both work together to drag me into the cold room. I manage to break free of their grip and shove one of them into the door so I can exit, attempting to flush myself in disposals since it’s faster than climbing the table, but the second cook (I believe his name was LeBlanc) catches me and beats me to death which I’m pretty sure he only did to get the bottle of nothing I refused to hand over to him. He then allowed the first cook (Who’s name I’ve forgotten) to take me back into the coldroom and start stripping me to prepare to put me in the gibber, which was only prevented by admin intervention.

I Ahelped not because of the initial series of fights, which in my opinion were an IC issue, and mostly caused by the cooks overaggression and my climbing over the counter in the first place, although after the cook became violent I did immediately attempt to de-escalate the situation. I ahelped because of the the final attack of the two cooks (which was preceded by the first cook clearly, repeatedly trying to get me to chase him into the kitchen so he could CQC me, again.) culminating in my murder and the first cooks attempt to put me in the gibber, and also included the attempted welderbombing because it helps to portray the mentality of the first cook. Both of those situations are clearly over-escalation by the cooks and definitely not justified by my previous actions.

Furthermore the rule my ban message cites for justification is “Admin Interaction 4). Do not lie in ahelps as we can verify any claims made via player logs. If you are unsure of how an event transpired, you are encouraged to look through your logs for verification. Lying in ahelps will result in a ban.” which seems pretty disingenuous, I didn’t lie in my ahelp. The rule states claims can be verified via player logs so this should be very easy to verify. The only thing I can see as being misinterpreted as a lie is me stating that the cook attempted to welderbomb me since he did not actually ignite the tank, but how else would you describe someone chasing you with a lit welder in their hand dragging a fuel tank after losing a fight? If the banning admin needed clarification on this they failed to communicate it to me since the only message I got from them was the initial reply that they were looking into it followed by silence until the ban was implemented.

As for the claim that I have a history of baiting conflict, this comes across as victim-blaming in this scenario, and me being told that by climbing the kitchen counter once, this is baiting the cook into engaging in a campaign in which he has unlimited jurisdiction to pursue me outside of the kitchen long after I’d left, clearly having the intent to murder me and remove me from the round.

Stating that I was trying to use admin intervention to deal with being retaliated against makes no sense since the admin has no obligation to intervene unless there’s obvious rule-breaking behaviour, which in this case there clearly was. I have been told several times that I shouldn’t hesitate to ahelp in these situations since the worst that can happen is that it gets marked IC which has evidently proven to not be true since I’m having to write out this appeal.

In conclusion, to me this seems like a very obvious case of self-antagging and over-escalating on the part of both cooks, not line-crossing behaviour on my part. It seems absurd to me that I’m getting punished for other people taking a situation too far.

TL;DR: I didn’t lie in ahelp, Cooks clearly in the wrong, logs will confirm this.

So I started reading up to here:

There’s a monkey already dead on the floor, and so I climbed the counter

And as this is a giant wall of text I went for the TLDR which is this:

TL;DR: I didn’t lie in ahelp, Cooks clearly in the wrong, logs will confirm this.

The ban still is correct, you baited conflict by trespassing on the kitchen. If you want something, ask and don’t greytide because it is faster.
And if you tell me you can’t ask because you are a mime, skill issue.