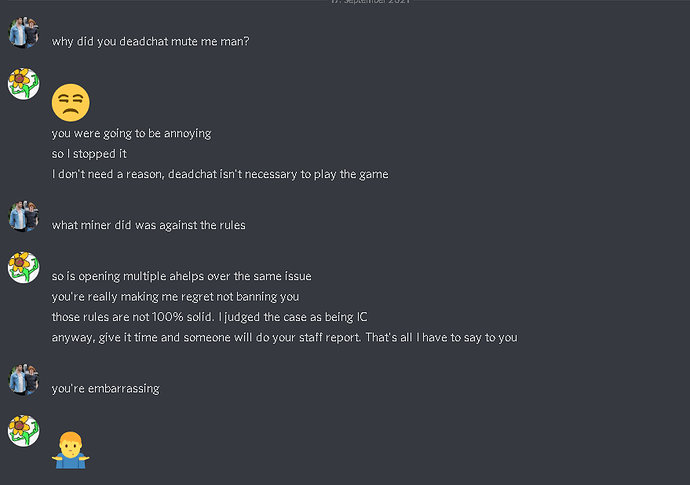 To which he immediately banned me.

Come on man, I know we had a little runin recently but yeah it’s gonna piss me off when you mute me in deadchat for asking a simple question. Maybe you’ve assumed I would’ve pushed the issue in deadchat but that’s far fom truth. I didn’t pm you on Discord to insult you, but you’re being a jerk over a minor thing that happened like two weeks ago.

I know I sometimes run riot on this server but I’ve tried my best to adapt to the rules as I come to like most of staff and the general mindset here. Stuff like this just leaves a sour taste.

I can’t handle this appeal, since it is my ban, but I have no idea who you are. I don’t even know what “minor thing” from two weeks ago you’re talking about. You have no note over it as far as I can see, so it must have not been anything important. I really don’t appreciate being called a scumbag though.

You responded to a ticket long after I died to a bug with “well looks to me like you’re dead” to which I replied “no shit”. You then replied “nice way to get off on the wrong foot with staff, idiot”. Seems foreshadowing if you ask me.

I suppose I’ll have to explain myself if you’re going to make me out to be malicious. I remember that first ticket. I did not say what you are saying, what I said was “That really makes me want to handle your ticket, idiot.” I remember that because Slig then sent you the “I can stay calm while playing Fulpstation” powerpoint after you opened several other tickets over this same issue. It is within our policy that we aren’t required to be polite in tickets to rude players. With your rude response, I didn’t feel the need to be polite any longer. I wasn’t rude at all to you in this second interaction. Seems like you’re the one holding the grudge here, rather than me.

Anyway, don’t bother goading me into responding again. I won’t be. Just wait for someone else to handle this appeal in a few hours.

I remember that first ticket. I did not say what you are saying, what I said was “That really makes me want to handle your ticket, idiot.”

Ah, suddenly you remember.
I don’t remember the exact wording nor can I look it up. Though It really doesn’t matter, both sentences have the same meaning and denotation.

“I can stay calm while playing Fulpstation” powerpoint after you opened several other tickets over this same issue.

It was ONE ticket asking you why you’re being so sensitive. I couldn’t help but think Slig wanted to send the presentation to you who gets worked up over someone saying “no shit”.

Then why did you mark the miner as an IC Issue, when it’s clearly against policy, if not for malice?

In the ban message you say I spammed ahelps. I opened two tickets in total. I didn’t complain in deadchat nor get others to ahelp, I simply asked if it’s against the rules. I didn’t turn to DM for the purpose of insulting you, you were being condescending in the dms. It’s just straight up lies.

I don’t wanna goad you into anything. My body hurts all over from the second vaccine shot and I feel robbed of the one thing that could possibly lift my mood. Hang with Grug.
Also I clearly got too much time on my hands.

I do agree the round removal was bad and shouldn’t have happened since they didn’t have an objective that would warrant round removal, so I get the frustration feeling like staff didn’t handle your ticket better. But there is 0 reason to be aggressive with staff or dm us.

9). Avoid antagonizing players and staff via the Discord, Forums, or through OOC/deadchat. While expressing frustration about in-round events is acceptable, ganging up on fellow players is not.

0).Our staff is composed entirely of volunteers who work to make Fulp a welcoming community to all players. While it’s okay to express frustration with admin interactions, doing so in a way that is aggressive or harassing will result in a mute or a ban. If you harass staff, expect consequences to come as a result of your actions or your issue to be discarded.

Let’s avoid messaging staff in the future if you have a problem staff reports are open all the time and we re-view them frequently.