Byond Account: BlessedLemon
Character Name(s): Zeke
Discord Name (ie: Name#1234): No Discord
Round ID of Ban: I don’t know if I should fill this out (appeal says why) 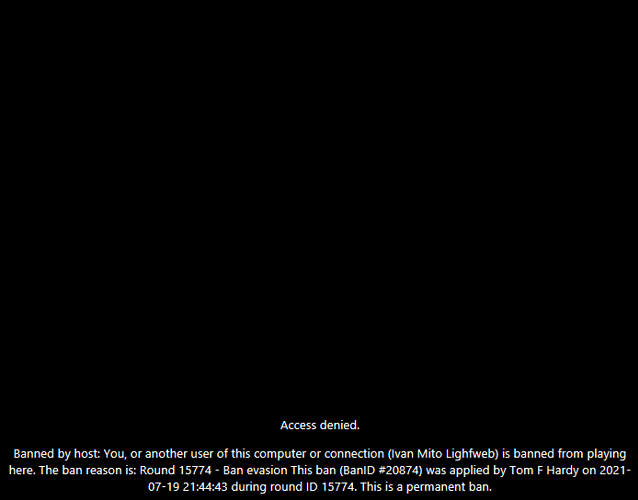 This is not me in the ban message. I did not know the computer was banned. I was given the computer by my brother when he left for uni.

My brother showed me youtube videos of this game a long time ago so I thought I would start playing it after he gave me the PC. He never told me he was banned on this computer until I saw the saw the ban message and I asked him. I played for I think 2 or 3 days before I saw the ban. I did not break any of the rules while I was playing. My brother does not have access to this computer anymore because he is in a different state. I do not know what else to say. I promise I will not cause any trouble. I was having a lot of fun. I will not break any rules.

You should be able to join now.

Please tell me if it works or not.

I assume you are a moderator.

It did not work.
It is the same message. I tried to close, reopen, and re-log-in.
If I need to do something let me know.

Thank you. It works.

Perfect, have fun on the server.