State your appeal:
During the round admin ordered the crew to kill me for being “Cringe felinid”. After asking admin if he/she is a aware about rule 5) I got responded that I have broken “Fulp Roleplay Standards”, without any further information on which one. I further asked to get the part which I have broken. Admin responded that we had this conversation on discord. I got banned from it for being “cringe” in the game.

I must say that even if admin believes that I am “cringe”, “cringe” people exist in real life and if I am not breaking any rules, only not acting how the admin imagines is not a good reason for Perma banning someone. But back to the topic. After I heard him mentioning our discord conversation I asked him he if he ordered it because he is Metagrudging me. Using our discord conversation to round remove me sounds very like it and I wanted more information about it.

On that I haven’t got any other response, only received a 3 day ban, I can’t show it here because I have posted already too many links, which is now a Perma ban for some reason. I must also mention the discord conversation, where I have been told that I am being ban baited by admins. https://imgur.com/a/C0oUhQ3.

My question mentioned there was about how is possible to lose the cat tail and ears by in game mechanics, if there is any I am not aware of and also asking admins to unmute me my ahelps in ghost chat.

The “Fulp Roleplay Standards” I have broken was something connected with using “Nyanspeak” from different server, but I have already posted too many links, because I couldn’t find any Fulp lore for felinids. Using “Nyanspeak” isn’t just putting randomly nya into words, but it it concentrates on how the words are spoken. For example “next” to “nyext”, but a need will stay same.

Non-Humanoid History, A Summary Of.

[CLASS 0: DECLASSIFIED] TOP SECRET DO NOT RELEASE TO PUBLIC NOFORN Solgov-Ardata Data Commision: Non-Humanoid History, A Summary of. A committee study on the common anthropological history of the current non-humanoids within the Galactic...

I should be unbanned from discord, […] getting information which specific rule I have broken and not just “you are cringe, lol. Ban!”.

Admin responded that we had this conversation on discord. I got banned from it for being “cringe” in the game.

I’m the moderator that banned you from the Discord server so I’ll explain in more details why that was - even though you had multiple warnings before, as Discord doesn’t show ban reasons to the banned users. Your Discord ban has absolutely nothing to do with the reasons you listed.

You were originally put in the shed by John Willard for talking about what he did to you in game while the round was still in progress where you were told to file a staff report instead and so on. 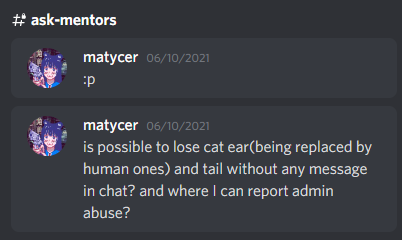 Later on, you left the server, got shedded once more, left again then rejoined again in order to lose your shed role both times. 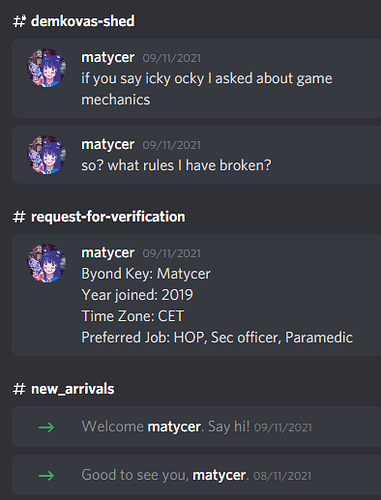 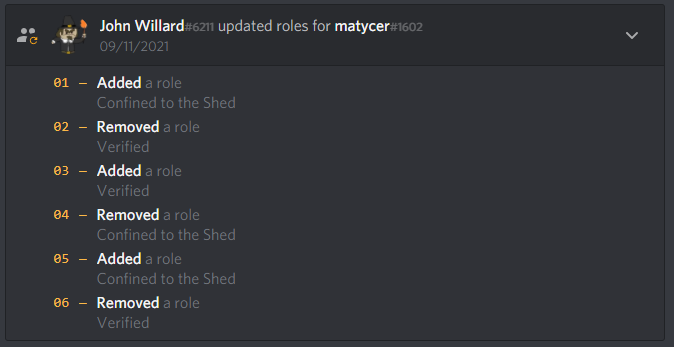 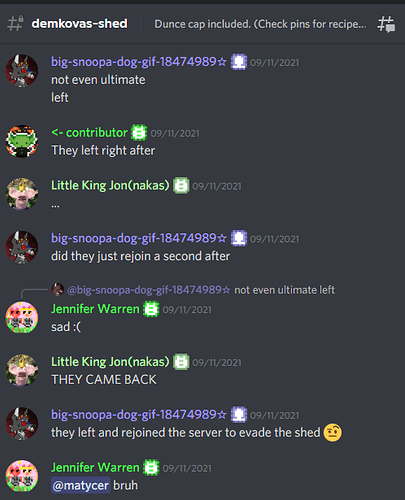 You were then warned by myself and Warren in request-for-verification to stop trying to shed evade, which you ignored as you did it again two extra times before I got bored of having to shed you every time.

The Discord ban had nothing to do with the way you acted in game, I banned you for ignoring our request to stop evading the shed which is as far as I know a legitimate reason.

Discord ban isn’t that important in this ban appeal and was there mentioned mostly because admin mentioned it while banning me in game.

but I haven’t mentioned anything from current round, I just asked if there is any mechanics, someone could mention ling powers, for example, getting question deleted lead me to asking for reporting it, it was pretty annoying when it happened a few times, that is why “:P”.

I asked multiple times why I am shadded and never got answer how asking about game mechanic is icky ocky. And I have never been told about stop doing shed evasion.

But I was even kicked from server few times and it seems you got bored because I rejoined each time after getting kicked out.

Yes, I left the discord the first I got shadded, but not to avoid shad, I was planning to leave forever… but after some time I changed my mind and because there wasn’t any problem while putting request, I was thinking that everything is alright.

Shedding is obviously meant to seclude you from other players and is something we do to try to correct a player’s behavior before we remove them from the Discord. This should be obvious enough, and leaving the Discord makes it clear that you’re not going to listen to feedback or don’t care about following the rules - hence the Discord ban.

The rule that should have been cited in the server ban is rule 1 - we are an MRP server. Running around screaming “nya” is not good RP. People being cringe in real life isn’t a good justification; people are racist in real life and we ban that here too. Cringe felinid RP is annoying, and we don’t consider it in line with our RP standards.

Anyway, you’ve made a pretty solid case that you have no intention to listen to staff feedback or make any corrections regarding what you were told, so it’s pretty clear you’re A. Not going to be a beneficial part of the community and B. Going to continue to waste staff time, so this is denied.

Go to a server where that behavior is welcome if this is how you’re going to choose to RP.