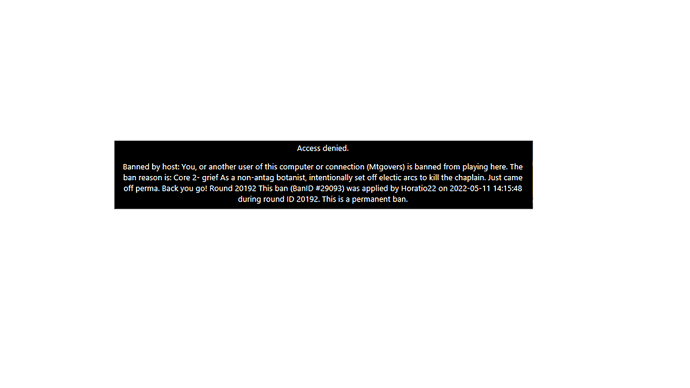 I was permanently banned 6 months ago for behaving very stupidly. To be honest, the ban was completely justified. With my track record of bans over all my playing time, I understand that some admins think I can’t change my behaviour.

After 6 months, I would like to show how much I have grown and can behave. I understand if you would still ban me from your server. I would like to be part of the fulpstation community again.

Under here is my ban appeal from the last time so that the admin doesnt have to seek out the appeal:

Sorry to everyone involved. i really acted stupid and caused a situation that was unfun for everyone. After i got banned i accepted the ban reason because what i did was completely stupid to do after i was just unbanned.

What happend from what i can remember is going into the fighting ring with the chaplain, a fight ensued with i think me provoking it and it ended in me shocking the grills with a iron bar multiple times. The chaplain was running after me trying to kill me while i ran out of the church wich was understandable with me shocking the grills. It wasnt my intention to kill him but i think with all the multiple shocks that he was completly valid in his response to act. from what i can remember i then when i ran out of the church i got the ban message from Horatio.

so that is what went down , i think it was a case of:

1). Escalation resulting in murder is only acceptable within reason. If your life is in danger, you can always fight back lethally, or if a conflict with the other player has lasted throughout the round with multiple fights . In most cases, fights end when one party enters critical condition or is otherwise incapacitated. Theft, break-ins, demotions, destruction of property, getting pranked and other inconveniences are not reasons to murder another player or put them into a life or death situation. Ask what a rational person would do and act accordingly.

i think it was a case of escalation but as stated the fight ends when someone is in critical condition and not murder and so far as i can remember no one died and i was planning on bringing them to medbay if they went into crit. Still because of the time that has passed i dont remember the events that went down completly and well.

The thing i definitely did do wrong was acting stupdily right after i was unbanned which ofcourse is logical because you will be closely watched after you get unbanned to see if you can behave. I hope that i can come back to the server and show that i can behave. I have read the rules again several times and also waited and worked on myself for 2 months to get myself together.

While I won’t handle this as I placed the ban, I would like to point out that your last perma appeal (which I accepted) was also very well written and your behavior in-game did not improve.

Hey Horatio,
I understand exactly where you are coming from and that was the case at the time. I would take any opportunity to show that I can behave and not push the boundaries. i am open to anything including an account on which i cannot play an antag or other measures.

I’m denying this because you have such a colorful history. You become active grief around get banned appeal and come back. Consider your fulp bridge burned.

I hope this speaks for itself
https://centcom.melonmesa.com/viewer/view/mtgovers