Ban Message (Gyazo/imgur or copy and paste): https://cdn.discordapp.com/attachments/713937118564450405/919890114702897172/unknown.png
State your appeal: i just wanna say i did some accounts when admins didnt use IP bans, i played some others servers while banned in fulp and saw why my gameplay and actions wanst very good, second is why the first account got bannedm it was because i did say some stupid shit like kill all gays while playing captain, something im not pround of, i just wanna play fulp with my new knowledge and prove how its almost impossible to me getting banned with my new knowledge of SS13 and the rules. 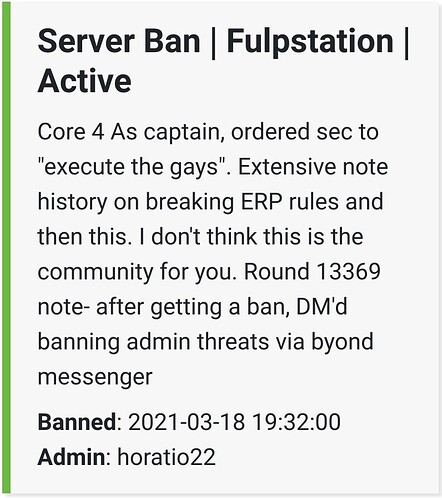 Here’s the original ban for mtofx. Obviously I won’t be handling the appeal since I placed it, but hopefully this will save whoever does handle this some time.

The community is simply better without people like you and you kept repeating the same rule breaking behavior before you got a perma, there is no reason to give you a chance to do it again.