Okay, first of all, I am black. “refused to acknowledge this”?! I offered a genuine question to how using common African-Ocenic Ebonics is “racist” - and I was not even warned, or answered on this. How in gods fucking name is me speaking in commonly used Ebonics “racist”?. Is Tom Hardy black? If he were, this would be even more confusing, considering he would understand our culture and how some of us CHOOSE to speak this way, it is not a choice of racism or ignorance. Who is he to choose how I speak being racist? I would understand if it were blatantly using fried chicken and watermelon-tier speech, but I was not.
I am insulted that he didn’t even bother to hear me out, rushing to ban me from what I can only assume is white-guilt or misunderstanding my intention. I was not using the Ebonics I chose in any racism manner, in fact, I was roleplaying with another black man IC who was using similar Ebonics.
Please, explain to me (an educated black man) how using Ebonics such as “ayo”, “brotha”, and “wassup” me being “racist”? I have plenty of other black mates that speak in much the same way. Are you telling me their culture, their way of life is “racist”, Mr. Tom Hardy?

I’m just at a loss for words, this is fucking ridiculous, and quite frankly, ignorant of him to ban me on such grounds without even hearing me out or trying to understand my position.
I apologise for the long-winded answer, but I am fucking offended that this gentleman message me, got an explanation, and refers to me as “failing to acknowledge this”. You mean failing to acknowledge his own ignorant projection? Fuck off. Please excuse my language, but the real “racism” here is banning me on pure ignorance of my culture and choice to use Ebonics I commonly observe and use myself among my family, friends, and daily life. Absolute joke.
I will NOT acknowledge being “racist”, as I absolutely fucking was not. I was told this server was a good place to start for SS13 coming back after several years, but I was met with this shit.

Can I please request somebody sane and willing to understand my position review this? This Tom hardy is hardly capable of rational decision making.

I’ll just let your say logs speak for themselves. 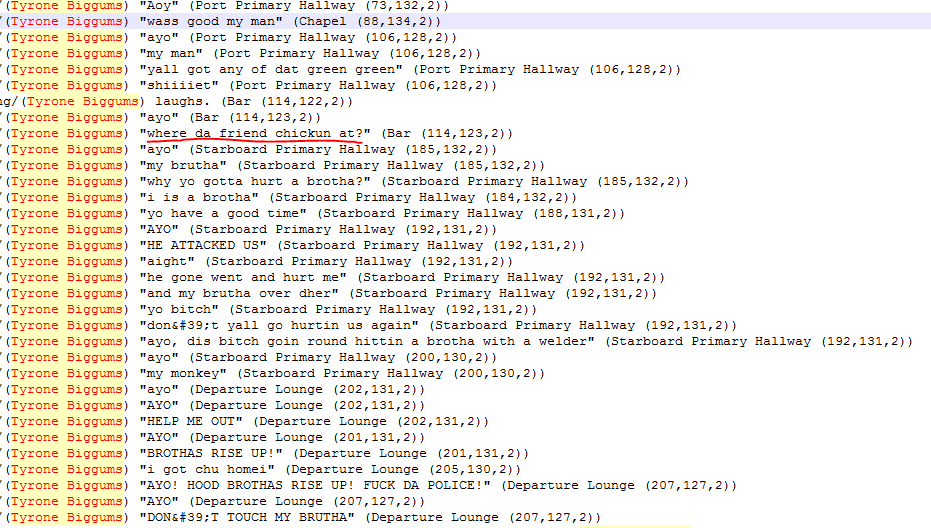 It’s about context, again. I had just eaten a Friend Chicken Nugget, finished it, then asked the chef where more of it was. Please provide context, my man. Also, instead of letting “the logs speak for themselves”, no. YOU speak for yourself, tell me, how is that racist? I am black, and do not find this racist. Please, explain.

Additionally, who are you to decide this is racist? No sane black man would call this shot as “racism”. This is frankly absurd and out of touch.

“And Tom for using admin powers to hurt me because apparantly demoting a shitter engi when the HOP was busy was ‘not being serious’ and being a ‘shitter captain’. and hell I listened to Tom until the engineer hacked into bridge to get his PDA back,at which point I attempted to demote again.”

Another exert from Tom apparently abusing his power. Not surprised.

Closing this until someone can deal with this appeal. I’m not going to humor this any more.

playing a dave chappelle character that plays directly into racial stereotypes and using speech that matches it is essentially tantamount to using the n word and therefore is against server rules.

don’t try to say that you weren’t trying to play a “a squeaky-voiced crack addict recognized by his white, blistered lips and constant scratching” because you and i both know where that is going to go.

using your professed race as a defense is weak because if you cared about black people’s issues you wouldn’t behave this way. word of the day for you is stochastic terrorism

In case it weren’t obvious by Wind’s reply to this, this is denied. Also, for future reference, freaking out and calling the admins Nazis immediately on the Discord is not how you get an appeal.