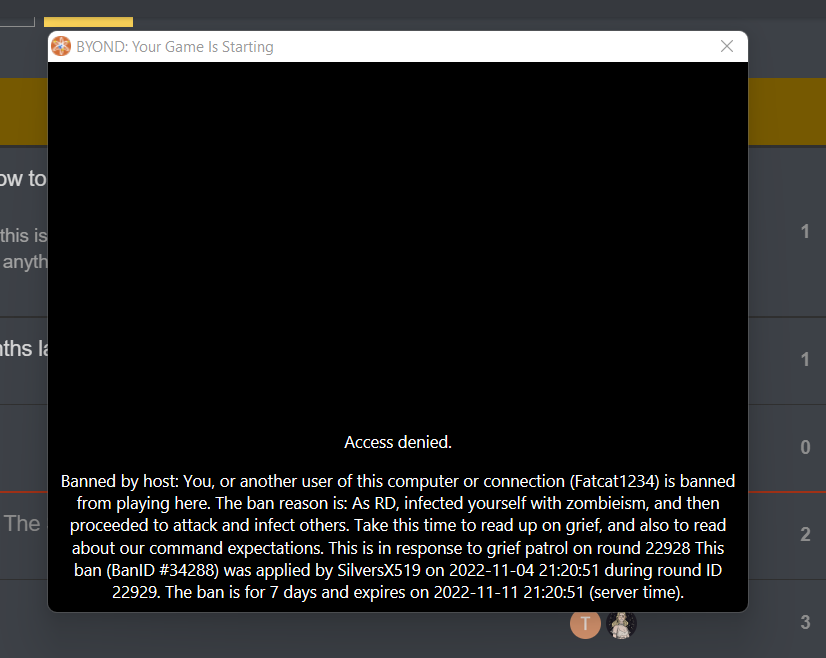 State your appeal: Well i was repley to Zeal but the topic got closed so here is my apology to them

Heyo! I think it’s actually pretty important that I do reply to this, and I’ve gotten permission from an admin to post this.
Please do keep in mind that I’m NOT a mod/admin, and just giving my opinion here on why I reported this.

First off though, I’d like to apologize for my own behaviour. No matter how frustrated I was during this round, and no matter if it’s what I ended up doing, in retrospect, I ABSOLUTELY should not have told you “I’ll griefpatrol you” & “what you did was self-antagging” at round end, even if it was after the shuttle landed. It served pretty much no purpose other than venting my frustration, and for that I apologize.

There ought to be some separation of how my character acts (understandably horrified by people studying zombies and not just killing them to prevent an epidemic), and how I personally act, and I failed to find that balance. Once again, sorry about that.

On the zombie thing, it honestly didn’t cause much trouble, all things considered. And to be fair, the main issue with the station was NOT the zombies anyway, it was the absolutely humongous amount of space carps that xeno made.
So the reason why I’ve reported it is not because it caused /me/ or the other seccies trouble. It’s because its simply NOT acceptable, in my opinion, to have a member of command do what you did.

As command, imo you have both in equal part responsibilities (making sure the members of your department actually have someone they can look to for guidance) and associated leeway that comes with the position.

For example, in a previous round, we had a captain ask RD to make a xenos pen to “raise an army of xenomorphs”. I believe we absolutely ALL knew where this would lead. But the RD accepted, and in the end it was a station-ending threat because an assistant released the caged xenos (and, i think, got bwoinked for it lol).
… and IMO, that’s acceptable. Because the captain never actually went it and did everything by himself. It gave a lot of people the opportunity to build, roleplay, and such.
It was a stupid idea, but executed VERY SERIOUSLY. And it ended up being quite fun to watch the xenos take over the station (but it would probably get old VERY fast if it happened every shift…)

In the very round we just played, earlier, I found a big rat simplemob in maints. What did I do? I dragged it to bridge. Could I have shot it dead with a lasgun? Sure. What happened? It was immediately spotted by the AI and that led to engies making a cage for it at the bridge.
Is what I did self-antagging? Imo, a bit. But then, so is acting goofy as sec and giving people leeway that they really shouldn’t have.
And most importantly, if by bringing the rat to the bridge I caused an immediate big problem (like, for example, it suddenly became agressive and rolfstomped the captain), it’s something I would IMMEDIATELY ahelp and take responsibility for.

In another round, I was acting captain as the HoS, and told a clown to help build the BSA. It ended up smack-dab in the middle of the station.
Is this self-antagging? To a degree. If you wanted to play perfectly, you’d have the actual engineers build it on station but very near space.
Was it interesting for other people? I think so. You had people being absolutely horrified at it in coms for the whole shift, you had a massive congregation of people near it at pretty much all points of the shift, etc.
Would I have fired it, had it gotten completed? No. Absolutely not. Because that’d be voluntarily griefing the station, because people would 100% die from airloss, pressure, etc.

And if I went, and built the BSA all by myself on the middle of the station, and fired it, I’d be 100% self-antagging.

In the end, I believe that as command, you have the opportunity to skirt the rules and act somewhat less competent that you ought to be, as long as it’s FOR THE PROFIT OF OTHER PLAYERS. It can NEVER be for your own enjoyment.

For example, with the zombie thing… what you could have done, which would have been more in-line with command and RD would be to study the zombies. You could have involved engineering, and built holding pens for zombies. Had testing on what they could / could not destroy, what they were weak to, etc.
Of course, something like that would probably go bad very quickly, to absolutely no one’s surprise. But it’s very different from injecting YOURSELF, biting people ON YOUR OWN, and causing the shift to abruptly end because the rest of command HAS to call shuttle at that point.

Hopefully this explains why I reported you. I was a bit salty during the round, but not because it caused me/the seccies in-game, rather because I really didn’t appreciate seeing someone on a command role doing something like that. And I’m personally not angry at ya or anything, now that everything’s done and that the moderator team has talked to you.

Either way, I’ve said my piece. Good luck with the appeal.

Alright, I’m going to interpret this as there is no action needed here and close this.