Before reading:
I took this case very seriously as I didnt got almost any in game support, the only one who actually took the time to trade some words was an admin botanist (don’t remember occ name) called Victor Vahn on that round. If you are reading this you can say hi, and thanks for showing interest and actually listening and caring it really means a lot.I’m putting a lot of effort on this report, took photos of almost everything so I kindly ask for you guys to take some time to really get the both sides of the coin and not just ignore my communication with you all, so thanks in advance.

Playing as a genetist and as a non antag, at that time I already had telekinesis, space resistance and also I was BLIND because of some willing experimentation with a virologist, I was doing my stuff and such, all things normal. I’m taking a ride with Clean4ucpu borg when at one moment I ask him to stop at chef cause I very was hungry. (Red kind of hungry)

He drops me at the kitchen and I see some type of food on the floor, I do not ask for anything so I just use telekinesis to grab some slice to eat. Sadly, it was stuck between a wall and the chef Caiman, it non intentionally hit him like 4 or 5 times. Bear with me, a slice of food hit him, the key word is Food!. So he just gets out of the kitchen and out of nowhere and without saying a word fucking violently assaults me. 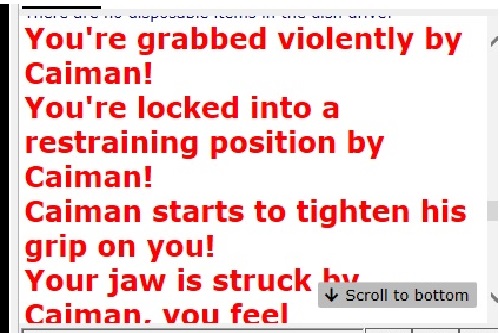 At that moment I’m like, what the fuck is wrong with you so I replied in that same tone

It was at that moment that the other chef Adamska Shalashaska enters the conversation showing big signs of aggression, power gaming and just acting like a total bully EVEN WHEN MY RESPONSE WASN’T DIRECTED TO HER!

It was the classic excuse of, hey idiot, what did you call me?? I’m gonna teach you a lesson by damaging you physically, to continue a beat up on someone who was outnumbered, blind and unwilling to get on a fight. 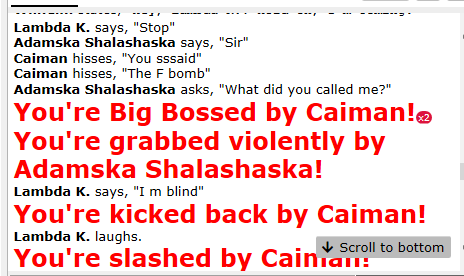 Before you say, oh you were laughing so it was consensuall let me explain that NO, it happened that I was on fucking panic mode and accidentally smashed the number 3 laugh emote on my keyboard.

Was at that moment when the two of them started to punch me, kick me and grab me at the same time, making me go unconscious for the second time.
This time caiman started to slash me with his lizard fingers and doing lots of brute damage. 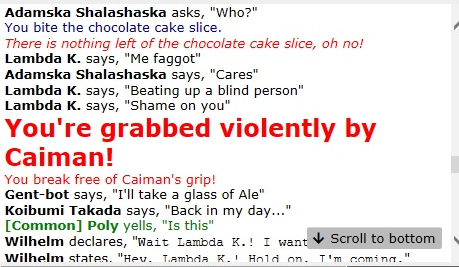 Even when screaming for help and to stop it, they continued the harassment.

I started to fight back, but I couldn’t defend myself against two people while blinded 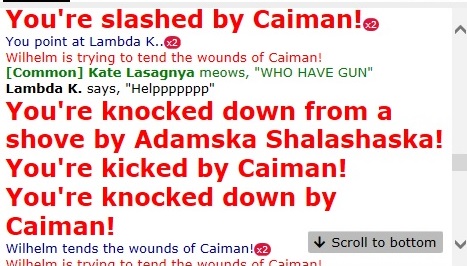 I got badly injured, but I wasn’t dead, just badly bullied. And here is where I MYSELF got really salty.I fully acknowledge this bad reaction from my part.
I used telekinesis from a distance to try to get a little bit of justice from the beat up, I grab a rolling pin and smash it into Caiman head telepathically a couple times. BUT, because I was severely injured I was very slow down in speed so they got out of the kitchen again, but this time to FUCKING MURDER ME WITH KNIFES AND CLEAVERS. 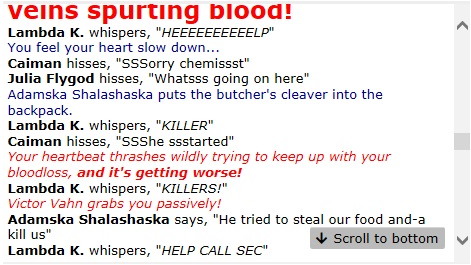 1My intention never was to steal but to eat some food at the kitchen.
2Why the fuck would I want to kill 2 armored chefs on plain sight while me being blind and while me not being an antag.?

By unintentionally hitting you with a slice of food, even if it was 4 times you escalated into direct violence and no warnings whatsoever.

It all ended when Victor Vahn pulled me out of the carnage, to be honest, I would have died and threw into a dead bag if it wasn’t for his intervention.Let me tell you, it was blood everywhere. 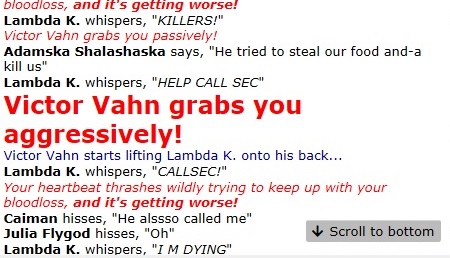 This is how I ended from all of this

Also got my arm chopped off by them

All in all, i asked for admin help

He closed my ticket so I reopened it calling it bullshit that it deserves more effort and research from his part.

I opened another ticked and got just one more message

Let’s get it clear that I do not want to report a staff member, but the 2 guys who tried to murder me, even if Tom asked me to make a staff report (when I said I was going to continue it on the forum in the form grief patrol) which I declined. And remember, even if you call me shitter or idiot directly to my face I DO NOT have a problem with you or a carry remorse against you.

This can’t just go like nothing, I was a grifier and a jerk in the past, I ruined peoples games, but also got banned 2 fucking times for being a jackass. I appealed for the ban and I have returned with a different mindset because I really like fulpsation and was digging my own grave by being a shitter. The people who reported me got their voices listened to and my punish was enforced, and not because I have misbehaved in the past means that I must receive a third class citizen treatment. Because I’m willing to be a better ss13 player and we all deserve a chance if we are willing to improve.

Something must be done, it just cant be ignored.

Thanks for reading and your time

Looks like all of your complaints were already handled in round by the online staff so I’m closing this. If you really have an issue with how it was handled, file a staff report instead. 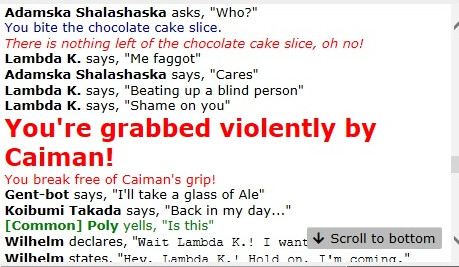 We don’t allow homophobic slurs on the server. You just came off a permaban for grief yesterday and are immediately griefing and breaking our hate speech rules. This is going to be your only warning that this behavior isn’t welcome here. If you need to be reminded again, it’ll be straight back to perma.