Then the admin messaged me telling me that playing it wasn’t allowed and people asked me to stop. When the song ended I didn’t start playing it again while talking to the admin. I was a bit frustrated in the sit I’ll admit, I asked him what rule I could possibly be (expletive) breaking. But I guess at that point the admin decided I was being combative and decided to hit me with a 3-day ban. I really didn’t understand “being a dick” was a bannable offense on this server. Clowns are usually dicks (slipping people, frying batons etc.) but they don’t get banned. Chaplains are basically clowns with bibles or assistants with swords as they don’t have any responsibilities that benefit the station in any way. But in any case, I apologize.

This honestly isn’t even so much a ban appeal as it is a suggestion to just remove the “lullaby song” from the music sect for chaplain if you are not allowed to play it.

Interesting to make an appeal when you break more rules then just the one you were banned for.

Toxic behavior to people asking you to stop

image991×18 2.36 KB
ADMINPRIVATE: PM: Sheets/(Eva Trounce)->CarlBlue/(Bondo Beeperson): you are critting people who are telling you to stop playing it in the middle of medbay when they respond negatively to you ignoring them. Its blatant kill baiting (had to be copy pasted to long to screen shot)

Then you were banned. They clearly state that your kill baiting people which means you’re trying to get people to attack you so you can kill them. The song makes sleep build up over time, makes people drowsy screen blur and yawn, then go into a sleep state. When you’re standing in the middle of medbay doing it so none of the doctors can work you are ruining other peoples round. Both the doctors and the people not wanting to be dead all shift. Then your responses to our mod was overly aggressive and instead of just putting your response in one message you send multiple messages pinging us over and over.

remove the “lullaby song” from the music sect for chaplain if you are not allowed to play it.

This isnt going to be removed because you cant be trusted to not grief with it.

I won’t extend this ban since it’s your first one and I’d like to imagine this won’t happen again but this isn’t going to be appealed. 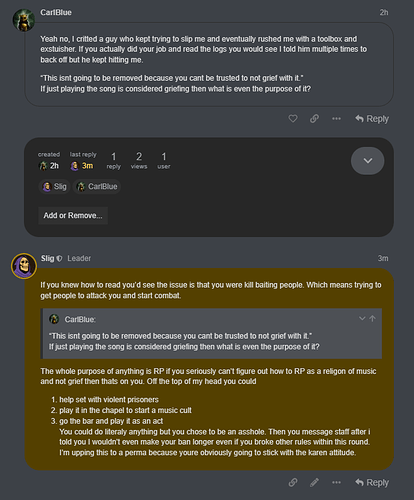