What happened: I had been converted into a headrev by another crewmember, and we had successfully completed our revolution, both sec and heads of staff dead. Gage Vern was a known traitor, however I specifically went out of my way not to mess with him or his objectives, given that, since we had already completed our objectives as revs, I had no need to really mess with anyone and thought I’d just go around into the abandoned head of staff quarters. As I am looting captain’s quarters, Gage enters the room with a borg, and proceeds to say something along the lines of “Sorry, no witnesses”. Not even moments later, despite me not even doing anything to him, he proceeds to cut my head clean off with a dsword, and also had done it to both Vivian Starr (another revolution member who was not even doing anything to him) and Dar Threvan (another traitor, but once again had no ill intentions towards Gage, outright admitting Gage had killed him from behind).

In the deadchat, we had all spoken about how this was probably extreme over-escalation on his part, and potentially even murderboning, so I decided to ahelp during the round, however no admins had been present. Once the round had ended, I made my way over to the discord to question Gage as to why he did what he did, telling me this in response:

Personally, I am just tired of the subject overall, and the ahelp during the round was supposed to be to end it a lot sooner, but at the request of Gage himself I am grief patrolling to get admin’s opinion on the matter. Also in case you were wondering… no, none of us were traitor kill objectives for him, either. 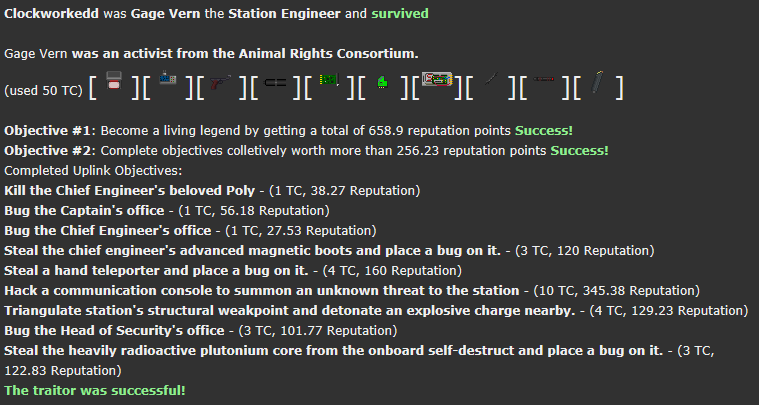