This cargo tech, who was not a member of my department, was ion rifling the bridge, and the HOS and I went to take it back. we tableshoved and took the gun away from him, and eventually he escaped. Later, he comes back for more, and attempts to shove me into a table. at this point I shoot and kill him, because we are in a nuclear emergency.

Escalation resulting in murder is only acceptable within reason. If your life is in danger, you can always fight back lethally, or if a conflict with the other player has lasted throughout the round with multiple fights.

This man had a gun that he was shooting around like mad earlier and also tried to glass tableshove me after he came back for a second fight. this falls under escalation. my life was in danger and He seeked me out to attack me. I gave him a chance to walk away when I entered engineering, but he entered and tried to tableshove me.

So, obviously I won’t be doing the appeal on this, but just for whoever ends up doing it, I’ve taken the liberty to get the logs from that round. As you can see, you disabled him immediately and would have been able to take his gun and that would have been the end of it. However, you instead beat him to hard crit DESPITE HIM NEVER SHOOTING YOU, which you claimed he did in the ticket when I told you that repeatedly throwing someone who was disabled into glass tables was over-escalation. The logs clearly show that this was not the order of events at all. In fact, the entire time before the altercation, the only time he shot another player was clearly on accident, and it was not near you. If you’ll notice, he actually only shot you once, and this was during the second altercation when he was already at 14/100 health. Saying “He tried to shove me into a table and then shot me” to justify the tabling is straight up lying.

In the ticket, you also justified going lethal by saying he “refused to stop”, but looking at your say logs, the only thing in your them even remotely around the time of the first altercation was you telling Nicole you loved her (which, we won’t even get into the implications of the core rule 10 violation there). You never told him to stop shooting. You also went on to say that you didn’t “have time to deal with someone ion rifling the bridge” but took over 5 minutes killing him instead of ahelping the incident.

You’ve also been warned that this is over-escalation when you were bragging about doing this on Discord a few days ago. You knew this was against the rules and chose to kill another player instead of ahelping, then grossly misrepresented what happened when talking about it on Discord. 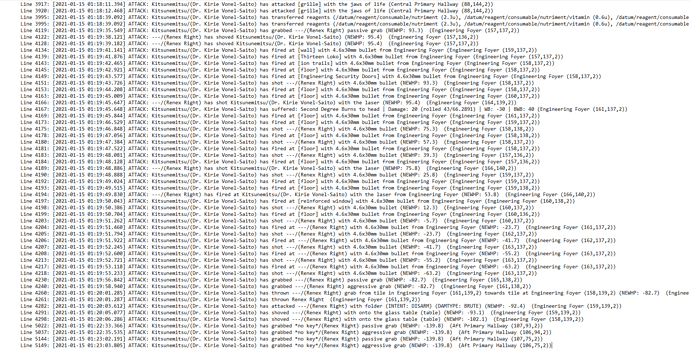 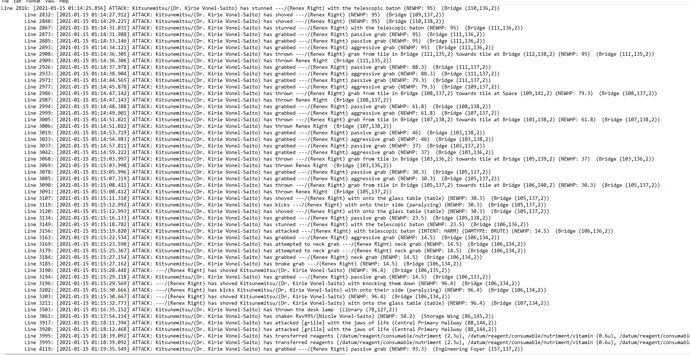 Ok, So the first altercation, I did take ONE of his guns, and I had no intention to kill him, that’s why he walked away.
I may have gone a bit extra by tossing him into a few extra tables, but I was careful to not even put him into crit. I had a medkit in bridge I was going to use to patch him back up afterwards.
These two logs are TWO SEPARATE Altercations. Once in the bridge, and the second after he tracked me down in the Engineering foyer. He was trying to shove and kill me on tables, and that’s when I started firing, because I knew that he had lethals. I didn’t even kill him.

And Joyce, I had noticed. He wasn’t at 14 health, because he was 95, and he shot me multiple times.
After my engineers killed him, I was actually carrying him to medbay, but I heard an explosion to the south and had to move to assist. The fight ended when I was sure he was incapacitated, and I was taking him to get healed.

In the ticket, I said he refused to stop because he came back to try to fight me, you’re right.

Telescopic batons are not an instant stunlock, and that’s why I threw him on the table. I threw him onto a few others, but I was going to patch him back up.

I was within escalation clause to kill him, as the fight took place over multiple times in the round, I knew he had lethals, because he was a cargo tech in a nukeops round, and he tried to stun me on a glass table after he hounded me down so he could kill me for taking his gun.
Not to mention that I didn’t even kill him, I was picking him up to take him to medbay after my engineers killed him. Both times I had the equipment and intention to heal him, but the round was chaotic, and I couldn’t the first time because he ran off.

I feel like this is a ban over some shitty joke I made on discord about tableslamming a chemist who tried to kill me with a bomb like 200 hours ago. That’s all.

Im massively confused regarding this as it seems to be one rule regarding some people and one rule for others. On round 12145, a nukie round, AA was given out to all the crew. I went to the RD office to get advanced surgery.
The RD, who I hadnt seen once all round, comes in and starts harm batoning me with his telebaton after not saying a single thing. He dislocates my arm and proceeds to carry on attacking me.
I AHELP it saying “So rd is murdering people in his office” thinking I was going to be killed, thankfully, I managed to get out.
My reply was Admin PM from-Horatio22: AA doesn’t mean you can saunter into a private office. Stop whining in ahelps about every little thing please. You don’t need admins to hold your hand when you’re playing a video game.
Im massively confused because whats the difference between me doing it on the bridge or in the RD office?
Also, I find it EXTREMELY rude that you say “whining in ahelps about every little thing” considering it literally isnt whining. its pointing out issues.

having AA doesn’t mean you’re immune to the side effects of entering restricted areas unless otherwise stated. RD attacked you because you were in his office, looting, presumably without asking.
here’s the ticket in question:

i checked the db and i do see that you submit ahelps pretty frequently. that’s not to say that you shouldn’t ahelp and communicate with the staff, but jumping to ahelp is also something that you should try to avoid.

that’s all i want to say about your comment devin. lets try to keep the thread on topic from here on