What happened:
I was crashing a lot the whole round, so I only witnessed the back end. Apparently Ahar blew up runtime, causing a breach. How this was done, IDK. CMO Maxim then chased them into maints as ahar fleed and killed them over the matter. Notably to the point their organs spilled out. He at some point specifically told Security he witnessed them complete a traitor objective. (Thanks to Ahar for the context) 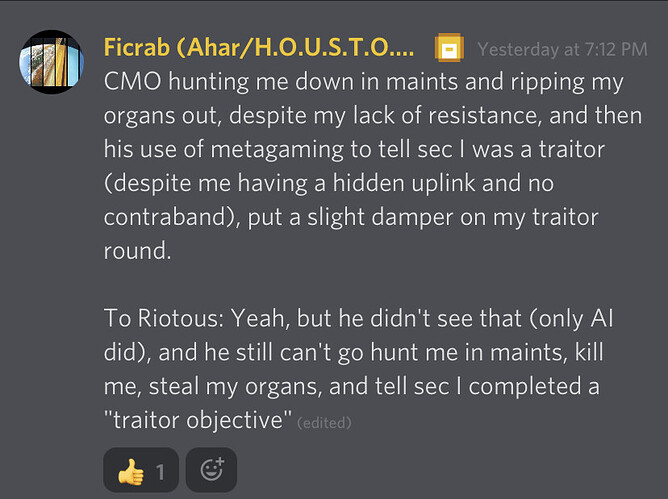 This is where I come back into the round. Maxim then brought them to be revived(im not sure if he brought them back THEN sec began charging maxim with murder, or if the body itself demanded an explanation). As security is starting the process of either arresting or acquitting (i proposed captain just pardon them) the round just actually fulps and its gone.

pretty sure the CMO also nuggeted them, i was observing that round a bit

Unfortunately it looks like the crash wiped the logs from this round, so I wasn’t able to look into it as thoroughly as I would have liked. Either way, this has been handled so thanks for the report!