How long have you played on Fulpstation?: 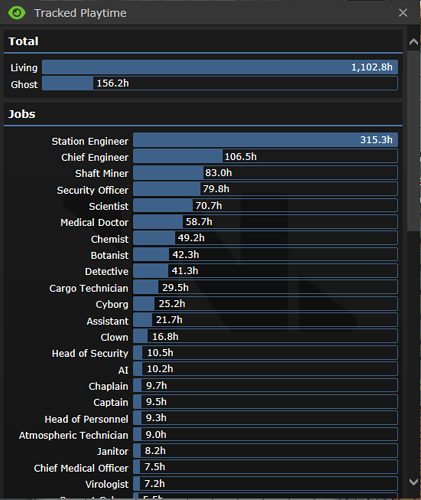 What departments are you able to be a mentor for? Can you elaborate on your experience in those departments?
I can mentor in all departments except Science (Nanites). Toxins/Atmospherics and Botany I know the basics of, as well as the core mechanics of how it works. Otherwise I can fill any other role on the station.
I’ve also got very limitted antag experience (amazing, I know) so I don’t know all the tricks and mechanics involved in all the syndicate gadgets, for example.
My strong suits as well as passions are engineering and security. I can do 95% of what is possible in engineering, exception being a bit to do with Quantum gates and some other devices that can be made. Given enough time, I believe, I could rebuild a station (minus the unbuildable things like the grav gen). For security I specifically have an interest in knowing my laws to a T and executing them accurately. Which means (sometimes) arresting people for petty crimes, or (much more fun) giving out fines/citations. Arresting people and building a criminal profile on someone is a blast to me. As well as conducting investigations and organizing the evidence in case of a trial (yet to have it come to that). I make a mighty fine HoS, I just prefer to be a grunt instead of a high value target.

What are some things you’ve noticed as a player on Fulp?
Almost nobody knows the space law or how to use the crime codes cheat sheet.
Also that there is a pretty big gap in between those who want to know how to set up SM, and those who do. I’ve already taught a good lot how the SM works and how to set it up. I plan to continue doing so through in character experiences. Though Mentor status could help with that a lot.
Also many people don’t know how to relink the t-comms system, which I would be overjoyed to teach people how to do (I wrote up my own little cheat sheet back in the day to make it easy).
Otherwise the player base is eager to learn and expand on their responsibilities as crew. Which is great! Engineering could always use more compitent engineers who can, for example, fix the atmospherics system in a syndicate bombed zone, or who can fix emagged doors (many don’t know how without an RCD).

Addendum: I recognize I have a bit of a list of bans and notes against me. But I have been making an active attempt to know the rules, know how to execute my role on the station, and not ruleskirt. I’d like to think I’ve been building a better reputation for being a rule abiding player as well as a better community member. I only wish to give back to the community and alleviate some work for the admins by mentoring some folks.

Good and experienced engineer, I have seen you quite a bit in-game.

I am a bit concerned with the whole server-rules thing, but I leave that up to the mods/admins since it’s not really my area lol

+1, Engineer main and i never had bad interactions with you.

You have a long history of toxicity - especially toward staff- that we will need to see improve before we are willing to consider this app.