From rock bottom to (almost) the top

I want to re-tell a round I had as traitor, as it was one of the most fun experiences I’ve had as an antagonist.

It starts with me being an engineer, I spend the first few minutes getting tools and weapons to use. I get a baton, medkit and some bolas to start, I can always pad it out with some syndicate gear. I hear over the radio, that the HoP and Mehmed Miller were touting codewords. As any logical traitor would do, I got myself some free AA. We parted ways and I went to engi, considering what contraband to acquire.

Karson Morris, another engineer, approaches me and asks for help with the SM. I thought it was a trap; however, I had bolas and a baton to fend him off, so I played along. To no one’s surprise, he pulls out a flash and tries to expose my moth weaknesses. I snap the bola around his legs and stun baton him, to which he says “you dont stop surprising me” before succumbing to stamcrit. I make a pair of cable cuffs and weld him into a locker, giving him a second chance. Before I can flee the scene, several officers arrived at engi, capturing us both, not even 10 minutes into the round.

We were took to the brig, where it was explained to me that the AI saw me try to kill Karson. Knowing he was the aggressor, I tried to make a believable story as to what happened. I claimed that he came at me with both the baton and bolas, before resorting to a flash. They were having none of it. I was quickly stripped and took to permabrig.

In permabrig, I met with my friend, Dwight Walker, who quickly accepted my story of incarceration. Before we could devise an escape plan, sec was upon us, ready to ship us to the gulag. We fought until it was just Dwight, the HoS and I standing. Dwight fell to the deadly combo of space and electric grilles, leaving me to deal with the boss himself. Luckily, a brig doctor barged through the permabrig doors, allowing me to rush into the hallway. Amazingly, I snuck into Beepsky’s room at the north side of the hallway, completely unnoticed. I stood in there for 5 minutes, not moving at all, hearing security ship my fellow prisoners off to the gulag.

I walked out into the hall, seeing the open locker containing my possessions. My bag and all access keycard were missing but I still had my tools. Knowing I could rely on my tools and engineering skillchip, I hacked into the gulag shuttle. Taking the route out of brig would be impossible, I knew I had the ability to get through lavaland, back to the station. Upon arriving at the gulag, I was greeted with some pleasant prisoners, to which I offered freedom to. Getting through the gulag doors was easy and before I knew it, I was on the station again.

Going through maintenance, I grabbed some new clothes and made my way back to the HoP. I flagged him down in a busy corridor, convincing him to get me a new ID. He granted me a new identity but forgot all access. I would still take it, as security were looking for ‘Tuyi’, not ‘Moth Mothington’. Mulling over my options, I met with Mehmed, who I had established as a fellow traitor not too long ago. We took refuge in a dark maintenance room to reconvene.

He passed over my old ID, to which I am still confused of how he obtained it, meds and free TC. Claiming he had to hijack the shuttle and kill a prisoner. I bought some EMPs and a dsword, just as he had. We rushed to the public mining shuttle, eager to kill Mehmed’s prisoner, finding some conveniently placed Krav Maga gloves along the way. Gulag was not housing Dave Brown, the prisoner, so we went back up to check the perma brig, finding a poor plasmaman warden up there. Two dswords made short work of him, with us quickly retreating to the gulag.

After getting some needed RCDs for hijack, we took some thermite in hopes of getting my trenchcoat. Hearing the shuttle being called, we rushed to arrivals, hoping to get into the armoury from space. I sprinted along the halls but backtracked to see Mehmed killing someone. It was his target, the prisoner. I silenced the prisoner with Krav Maga while Mehmed beheaded him. A doctor saw us, knowing this, Mehmed chased him to arrivals where he claimed he was a bloodbrother. Having no way to confirm with codewords, he turned to the one item he could use to prove his guilt, the reflective trenchcoat. It was if the Gods had blessed us, seeing Mehmed’s target and a witness that bared my steal objective. We took the coat with force, running to evac, preparing for our final task.

We got to evac with 5 minutes left on the arrival timer. We murmured some vague plans about hijacking but we weren’t sure on what to do. He told me that he’ll back me up, so I took the lead. We walled off evac with copious RCDs, sealing ourselves in from outside intervention. Seeing us wall off evac, we had no choice but to murder all crewmates waiting at the evac lounge. Three of them fell quickly, with some taking a bit more effort. Before long, nearly 10 people lay dead in evac, with more besieging it from the outside. Mehmed held the south side, killing a borg and a crewmate attempting to escape. I held the north, EMPing a borg and scaring off other crewmates. With more desperate attempts to RCD the holes, the crew eventually got to us. We managed to cut down many before being disarmed from the curator. Luckily, Krav Maga can’t be disarmed with a mere whip, so I legsweeped him and stole the whip. Another crewmate tried to use the dropped dsword on me, which I managed to disarm. With 30+ people in one room, I decided to attack every single person I saw, getting mortally wounded by a hulk in the process.

While we both fell to the hordes of crew, going from absolutely nothing of a perma prisoner, to a station wide threat, was the ultimate success. 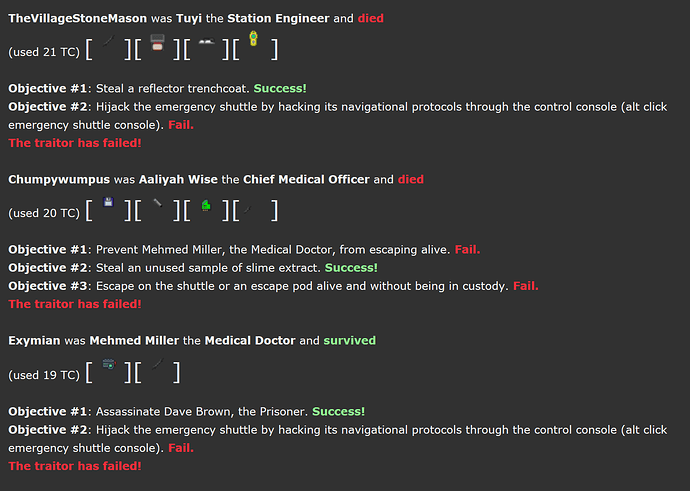 Hahah i loved the evac fight until the whip made us part with our dswords. I got AA the same way, but i didnt do anything at the beggining of the shift as i needed to kill a perma prisoner and to hijack so i just do my job. I go and obtain sechuds but keep them in my pockets for later.

After i get a not-so-suspicious looking mask,i equip the sec hud’s just to see myself set to arrest which i was suprised at as i was in medbay doing my job till now. I buy my equipment and go check my notes on why i was set to arrest which were blank but i still remove my warrant. I go to genetics to get space adaptation to have space as an option of escape route but then an officer tells me that i was wanted by security though he didnt know why so he couldnt do anything about it so i assure him that i myself would go to sec and sort it out no problem. Now that was suprising again because usually sec officers do not usually notice if you dont have a big W on you so i feel like they are looking for me big time.

I go back to medbay to check if my target was dead already. I saw a warden notice me and pull out his baton but he was too slow so i decided to lure him to maints.I slip him with a soap then kill him right then and there. I check his bag and i found my friend’s ID which i have feared that they died. I open the pda and there it was,our conversation on wanting to hijack the shuttle was right there for all of sec to see.

I call for tuyi one last time in comms hoping they are still alive since we apparently were known about and there nothing to hide but i got no answer untill a familiar looking moth starts pointing at me and that evolves into the story our beloved Tuyi has told.

Oh wow, I didn’t even notice the identity change! I was the ai that round, I didn’t see karson attack you at all when I was first notified of the situation. All I saw was you cuffing him and welding him into a locker.