Byond Account: greniza
Character Name(s): Pomegranate, FruityMoth.PY, Eats-The-Pomegranate
Discord Name: Greniza#6239
Age: 18
Timezone: PST
Active hours: 20:00-23:00 on most days
Are you interested in becoming a mod?: Maybe. I’m not sure how I’d deal with that responsibility.

How long have you played on Fulpstation?
I’ve played since February 2020, with a combined total of >1500 hours. 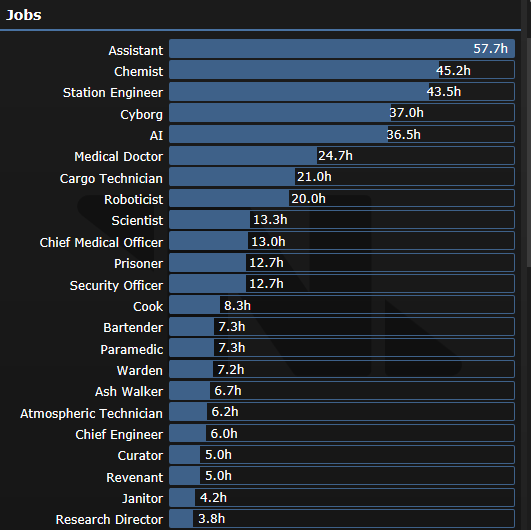 CHEMISTRY: I’m experienced with Chemistry, although I don’t know exact numbers. My knowledge of how the pH system works is a bit fuzzy, and I’m not sure how the impurity system works either, but I feel like I can help with more basic stuff. I understand factories too.

SILICON: I know my silicons, although once you unlock Silicons you’re pretty experienced with other things, so I’m not sure how I can help there…

ENGINEERING: I used to know the SM better, but it’s gotten rebalanced some. I know how to work with pipe net systems, and their dynamics. I can help out in that region.

MEDICAL DOCTOR: I have a fair bit of in-game medical knowledge, although I’m not sure how that will translate into me helping others.

I may have more applicable expertise in other departments, too, but those are the main departments in which I have special expertise. The main areas that I lack any expertise in whatsoever are virology, anything in science anymore, botany, and mining; in those specific areas, I am entirely unable to help.

I’ve said this in previous applications, and I’ll say it again; I really like how welcoming the admins are. One of my earlier memories of this sort of thing were when I was playing warden. This toxic player had gotten arrested, and we were dealing with him when he started spewing slurs over the radio- he was banned within the minute. I can appreciate having admins and moderators that are this responsive. I myself have been in trouble a few times, but never for unfair reasons- the admins are very fair.

i did the math on the shown hours per job, it totals up to 404.3 which is not >1500 hours, other than that +1 cause theyre a cool medbay person, but it would be nice if they were able to help with more departments

Not a hard opinion on this app, other than this argument you had with a moderator on #criticisms (which doesn’t make much sense because the antag you were is 100% valid to any crew) 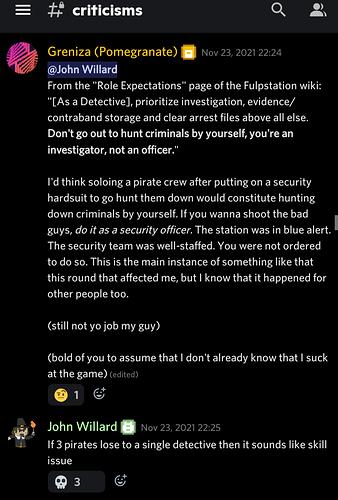 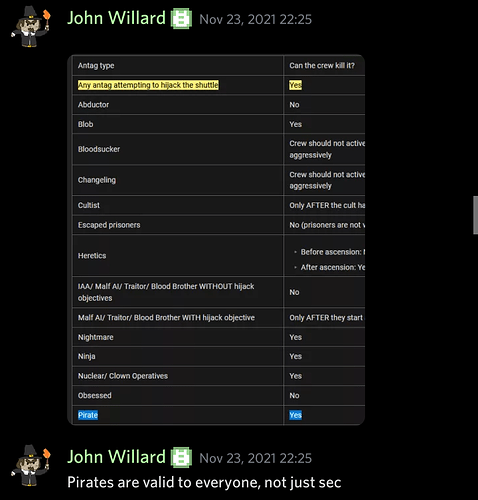 Yeah… I did that. I was a little bit salty that I got owned, sorry if that’s not… yeah, I shouldn’t have said that, that’s kind of against the channel rules. I was malding after getting curbstomped a bit, sorry. I can’t justify it reasonably.

I’d assert that that isn’t necessarily a reflection of my character, but I have no material way to back that up. I was unhappy at the time, and although I could argue that it was supposed to be funny at some obscure level, the statement I made doesn’t come across as that. I didn’t really look at how really mean-spirited this reads until now, and I should be more attentive to this sort of thing.

I genuinely do want to help out Fulpstation, and I genuinely do believe that being a mentor would help with that. However, if I’m not cut out for mentor, then… I don’t know. I don’t know how to help out, how I can improve this community. Willard, if you’re reading this, I never mean to be mean-spirited, although I may come across as such sometimes.

who tf has more ghost hours than living…

Just a personal critique from last night. I was CMO and had to yell at you twice about abandoning the medbay floor all shift. The only MD that was doing work was a brand new player, and every single time I walked into medbay to check, he was the only one doing work. When I yelled at you and the other MD on comms about why there were five corpses in medbay and only one MD doing work, you replied with “Because it’s an hour and a half into the shift and I’m bored”

I don’t remember if you were an antag, if so I’d understand a little bit more and I’ll take this back, but if you weren’t an antagonist, you had a prime opportunity to teach a new player the ropes and didn’t even notice so -1

I was antag with a particularly elusive target. I didn’t know he was actually dead until literally the round end screen, and I don’t think I ever even saw the body. I would’ve loved to help a new player, but again, antag.

Your concern that I was just screwing around was valid, and had I not been antag, I would’ve spent more time in medbay.

Okay that’s understandable then, I take back my -1

I can send you the round end screen for that round over Discord if you want, but it’ll have to wait until this afternoon. Twox was my PAI pal towards the end of the round, he can second that I was antag that round.

I believe you, I wasn’t sure if you were or not which is why I included “if you weren’t an antag” part. I was frustrated that he was new and had to kind of learn by himself since I had CMO duties and couldn’t help him out more.

Considering the last apps were rejected based on your combativeness toward staff and you’re continuing to get into arguments in criticisms (which we generally don’t like mentors using frequently), I don’t think we’ve seen the behavior change yet, and you haven’t been particularly active on the server or Discord lately. This app is denied; feel free to re-apply in a few months.