Byond Account: greniza
Character Name(s): Pomegranate, FruityMoth.PY, Petra Flutterina, as well as several other characters which have “Pom” in their names - many of whom I have not played recently or even at all! Keep an eye out.
Discord Name: Greniza#6239
Age: 18
Timezone: PST (UCT -8)
Active hours: Depends on the day. Some days I might be on from 4pm-8pm almost uninterrupted, other days I can’t play at all, and other days still I’m on for the entire day!
Are you interested in becoming a mod?: Not for the time being. Maybe sometime down the line.

How long have you played on Fulpstation?
These are all my roles with more than five hours of playtime. 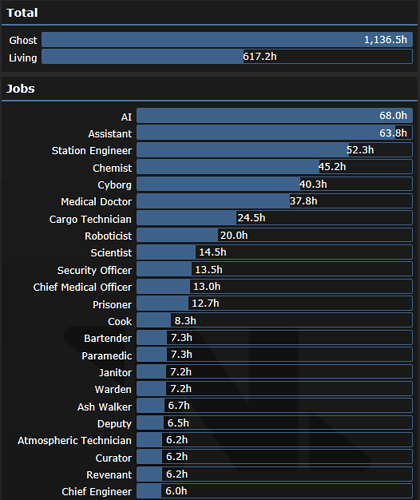 I am well versed in all but a few non-RP roles (Botanist, Shaft Miner, Virologist, Xenobiology), as one often is after 600 hours of live playtime, with some experience even in Botany and Xenobiology. Aside from those four roles, I have never played Chaplain or Mime, but I have experience in every other role in the game.

My three main areas of special expertise are as follows:

SILICON:
With my recent playtime, AI has become my most-played role. I’m experienced with the ins and outs of playing AI, as well as those of playing Cyborg- how to interpret laws within server guidelines, camera groups as AI, hotkeys, specific funky mechanics, et cetera.

CHEMISTRY:
Before I shifted to the Silicon lifestyle, I threw together expansive chemical factories in the lab, at least before pH and purities. However, playing Chemist a few times after this update has taught me a fair bit about how pH and impurities work. My knowledge, while somewhat dated, is still oftentimes applicable, and I can give advice on how to make a chemical factory.

MEDICAL:
As a tie-in to my chemical knowledge, I know a fair bit about the most efficient way to get someone back on their feet- organ damage, physical damage, I can handle it, if I have enough time. I know enough that I feel like I can instruct a player on how to perform well in Medbay without needing external aides.

One of the things I’ve really noticed about Fulp is that it’s a very accepting community. My main character, Pomegranate, with their wings, is almost literally a walking pride flag, but I’ve never received any snide comments or harassment in-game or out.

We all have our sins.

Pomegranate tastes weird to me +1

Accepted! Welcome to the mentor team.