What happened:
I joined late as the HOS to find the captain had done an american gimmick and i THINK mach, the hop decided to hand out guns to ALL the crew, before the ai with hogan laws and the crew decided to do an election gimmick. Ahar was elected the new cap, me being stupid and not paying attention took an auth for execution from him, thinking he was the original, the warden Ellenor Sulyard then talks me into doing a hostile takeover and demoting them for authorising the execution of all “rioters” on sec comms and questioning the legitimacy of their election. Meanwhile im watching the 4 people listed above talk about killing the captain for their position on the bridge, so i ask them to go to brig with me, they all refuse and try running so i drop some flashbangs and they immediately open lethals, an engineer even trying to pull out a flamethrower. Sec comes and we gun them down, but dont recover the bodies because we were going to try contact centcomm and fix command. We arrest ahar a while later and im waiting on the bridge when Mach-Witseidutsei, Dravir & Leo Woods walk up, guns all drawn, i shoot first and manage to behead 2 and kill the last one before bleeding out from their mosin.
They then admit to doing it because theres no admins in dchat (paraphrasing) and someone thinks that means theyre allowed to break the rules when theres no admins on. 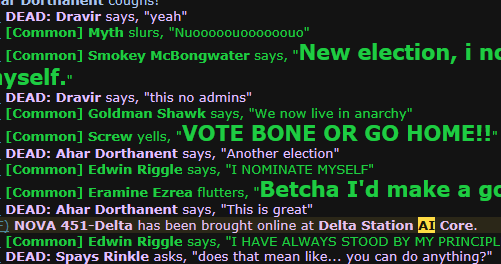 I have no idea where the real captain (smokey mc. bongwater i think) was the whole round and im pretty sure mutiny isnt in the HOP’s job expectations.
also forgot to mention ahar, the elected cap was promoted from det

This is not accurate. I notified the HOS (you) of the illegality of the transition of power, and subsequent illegality of execution orders given by the fake captain.

Leo Woods was an antagonist with a contractor kit.

I personally witnessed Dravir fire lethal lasers at the HOS (though I didn’t know it was at the HOS at the time since the target was below the edge of my screen). Other than that, I was too confused to know what was going on.

Overall, this strikes me as more of a misunderstanding than deliberately malicious acts, but that’s up to the admin(s) to determine.

My bad, i didnt notice leo woods was an antag since everything was kinda happening at once, but we did agree on removing the acting captain, and mach tried to declare cargonia with the other 3. Im not exactly sure what happened in the first fight because i just saw them pull out mosins and flamethrowers and tried to fight back. Im also not sure who gave everyone guns but i recall mach also advertising it on comms when i arrived.

we did agree on removing the acting captain

We agreed on removing the person pretending to be the (acting?) captain.

yeah, thanks for clearing things up, you were so good IC too

Mostly correct from Sec’s point of view, although you left out that the original Captain oversaw and approved the election, and remained actively playing throughout the round. I (Ahar) also immediately contacted CentCom upon taking the position to try and make sure the promotion was legit. I did not know there were no admins on until much later in the round.

The only executions I approved were for a murderer (capital crime) and a contractor in full gear (EOTC). I ordered a kill on sight to the former HoP after he was reported opening fire on the HoS, and ordered it because they were armed. I think I ordered a few more arrests, but these were meant to be an IC extension of the America theme that was going on that round, and I may be a bit fuzzy on the details of those.

There is a bit of a binary here. Either I was rightfully appointed by Captain, in which case the HoS was mutinying, or the Captain derelicted duty, which would mean that HoP was acting Captain. I’m not sure how in either scenario the HoS is acting captain, and able to start round removing crew (which they did). This round seems like a funny gimmick that was taken a bit too far by some players. At the end of the day, breaking out the ban hammer for any of this seems unreasonable.

Again I have no idea who ordered the guns, nor where the original captain was, naturally I would let the HOP would assume that role if the captain was dead/ran away, but they tried to kill me for asking them to come to the brig, I was also under the impression the hop ordered a bunch of guns, command expectations also say “In the absence of a captain, the Head of Personnel or Head of Security must serve as acting captain or split the duties of the captain between themselves.” BUT I dont want to get too lawyery here, it was a massive misunderstanding but the people I put in the report originally seem to have been rulebreaking from the start.

If it helps at all, I have these screenshots from relatively early into the round.

Either I was rightfully appointed by Captain, in which case the HoS was mutinying, or the Captain derelicted duty, which would mean that HoP was acting Captain

naturally I would let the HOP would assume that role

Firstly, I have no idea where people get this idea that the HoP automatically gets to be acting captain. According to the server rules, which in fact Sheets has quoted, the HoP and HoS have equal standing in becoming acting captain, whereas other heads only become acting captain if there is no captain, HoP or HoS.

Secondly, by running around engaging in murder and/or attempted murder, and neglecting his duties, he would also be engaging in dereliction of command, so, even if the HoP was first in line, the HoS would become the acting captain.

I have no idea (…) where the original captain was

I found him near medbay at one point. He stated he “was no longer captain” when I asked him about an execution.

I believe after HoP, HoS, and I were dead, he briefly reasserted himself as Captain to hold another election.

Cargo had a ton of mosin crates alongside crates with flamethrowers and incendiary grenades (and SWAT armour crates I believe as I saw a lot of people in that armour run around outside and inside cargo). They most likely got guns from there. No one in Cargo I talked to (as I was a very latejoin miner) knew what the hell was going on or just ignored me and kept doing their own things arming up. Even ignoring questions about “Is this a revolution situation” as I also saw mindshields laying around in Cargo.

Also in regards to Captain, actual Captain, he escaped on a pod dressed up as a doctor I believe? At least from what I saw myself but I could jsut be seeing things wrong.

Dealt with, just for anyone who sees this, arming the entire crew for no reason isnt ok, forming a militia as hop so you can validhunt also isnt ok and if you want to hold an election as captain get admin permission first gimmicks are cool but people can use them as an escuse to be shitters