We as fugitives spawned in maints in a room left of grav gen in Meta Station. Skipping unnecessary details, i saw maints on fire, and CE chasing my fugitive buddies. He killed and husked us all with no survivors. At least he was decent to tell people to take us to med ! 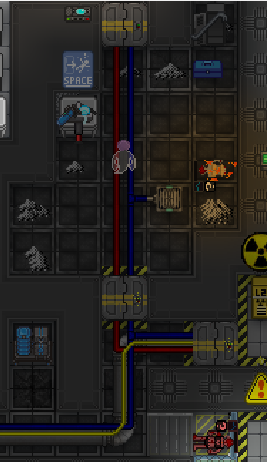 Now i dont know if this falls under valid hunting and antag prepping but he RDM’ed for sure.

So. Name’s Ryan Hawkins to be accurate and I think the calamity can be explained.

To keep it short and simple, a Wizard had just attacked and taken out TComms, I’d called for Security to come support and fight back (they didn’t show up, this is important.) I arrive at TComms and find someone asking for help as another person is already Crit. I move in with a Baton to maybe do something, get attacked and hurt by a summon. Then decide its best to backpedal and get something more substantial.

Cue making a flamethrower. Flamethrower is made, I return to TComms to find no Wizard but two dead people, I carry and drag their bodies back through EVA to the Engie Lobby and get a local to take the bodies to Med. As Im moving up to check on the SM (TComms is down so the Tablet aint working) I hear banging in the Maintenance tunnels just above the SM from where I’m stood. Note, I’d just got back from fighting el Wizard and he had skedaddled.

Now, as I mentioned Sec hadn’t responded to my assistance call earlier so I decide to take things into my own Engie hands to protect my turf. Moving up into the Maints I find people beating down the doors and ONE OF THEM is wearing a full Wizard getup, pointy hat, staff and all. So given I dont want to be turned into a crab, or something, I bring down flame upon them to stop ‘The Wizard’ and his Apprentices. They drop, they die. I take their bodies out of maintenance and to Security, explaining its the Wizard but to take them to Medical first for revival and then Arrest. Because no one should stay dead afterall.

I only find out after the round is over from Lang who had been somewhat witness as a Ghost that they had been Fugitives who had just spawned in those tunnels at that moment and that the real Wizard was up in Sec at this time. Unlucky timing and outfit for the Fugitives considering what I had just encountered. So ya know, this happened.

Hopefully that explains it, my bad. It was a mix of misinformation and unlucky timing. Sorry guys! If I had known otherwise it’d have turned out different!