Okay, I need to cover two things that happened in one round. Hopefully it’s okay to see them both in one report.

Just the previous round I had stopped them completing their Antag goals of stealing the SM sliver while they were a Paramedic at round start. Cut to this round, they were now an Engie and then this exchange happens. (There’s some more stuff before the screenshot.) Im wondering if they were meta-grudging me after the last round. Anyway, they throw themselves into the SM, setting it off into a delam early but I managed to save it. Either they were antag rolling or they were just being hateful over the last round. 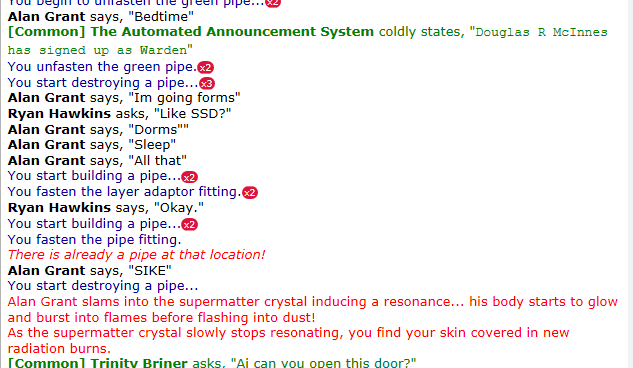 Not the best round I’ve had tbh.

Please remove the second patrol, as it has already been handled in-game by a mod. If you don’t like the way it was handled, you’ll have to submit a staff report, but bringing that onto the forums is admin shopping and against the rules.

My bad. I didn’t intend it that way. (Didn’t even know the term Admin Shopping tbh till now.)
It was meant to be about the guy who did the Perma-Killing when it wasn’t allowed. I was just including the full picture of what happened. Even the Byond account and name listed for it was about the Perma guy.

The incident listed in this post has been investigated and handled by yours truly!