I'll start with a Detective story from a while ago

Buster was the leader of a gang called the “right arm gang”, where they’d force all their members to dismember their left arm and commit atrocities against people with left arms. Reed, owing a lot of debt to them, was forced into joining. He had his arm dismembered and was forced to commit several crimes including, reportedly, burning down orphanages. I questioned Buster about this and recorded half the conversation. I sadly didn’t start the recording soon enough so wasn’t good enough as evidence.

Reed was then sent to labor camp with max points (despite being blind) over this, and Buster was arrested for a BSA-related incident. After breaking Reed out of labor camp, we started walking towards Buster’s cell to make it all come together in a cool court case for everyone to see. However, the Captain instead ignored me entirely, and rushed Buster’s execution when he was needed for the trial. The Captain batoned me for trying to stop the execution temporarily by bringing Buster to the courtroom, and I batoned back. Suddenly the entire Security team in the courtroom freaks out to arrest me, so I baton them all, grab Reed and make a run for it. Security starts a manhunting, declaring me rogue. I had previously taken Buster’s PDA during the questioning, and the PDA’s message history had several “urgent” messages to Jack. Expecting Jack to still be alive, we deducted he is the last living witness that can testify in this investigation and prove Reed’s innocence.

We spent 20 minutes looking for Jack down endlessly and the entire Security team was hunting us, some with lethals, some with Thermal vision, some not being related to Security at all, like the Captain and a Medical Doctor. At the end, with 2 minutes until shuttle, we gave up, we walked up to the HoS to give him what little evidence we had. I begged him to read it properly, and the HoS knowing he was outnumbered, called for help over Security comms. In the meantime, they picked it up our poor excuse we called “evidence” and pretended to look interested as a crowd of Security slowly formed. Most of the Security team seemed relieved to see we weren’t fighting, and even greeted us. Then, once they had enough Security personnel, the HoS yelled “BRIG HIM” and it was over. A quick 5v1 battle resulted in being left in permabrig in cuffs as shuttle left. Who knows if there was a potential right arm gang member hidden among Security’s ranks, and they subverted the narrative to ruin any hopes of redemption. 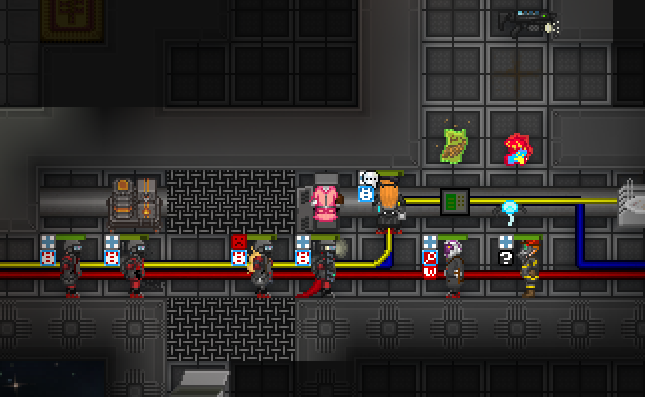 why, it’s space aids of course

its really sad actually because we all suicided, woulda been an even cooler story if we hadnt…