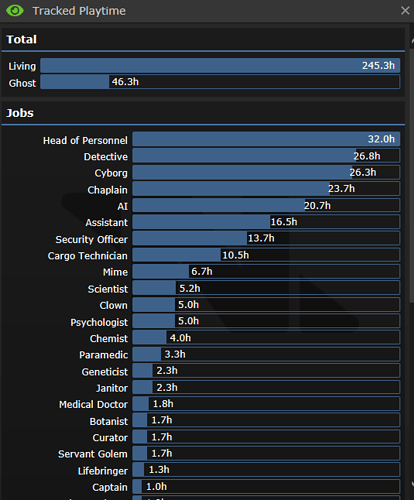 Silicon: I have a solid understanding of the silicon roles, AI is my favourite to play on low pop. Through playing AI, I’ve gotten enough of an understanding on apcs and air alarms to stop most disasters before they come to ahead

Service & Caro: Most of my assistant time is doing botany, cargo and janitor stuff. I know my way around the order console and how to grow some nice plants. I also enjoy chaplain, teaching people how to do stuff for the gods is always fun. I’ve been working in secret on pioneering a new clown tech, as of right now clown is my favourite job.

Science: I basically only know xeno.

Medical: I’ve got few hours on medical, but I’ve got a handle on surgeries and basic patient care, and I am getting pretty good at learning chemistry by hand, though plumbing is far above my pay grade as of now lol.

Security: For the last couple months I’ve been playing nothing but sec. It’s pretty fun. I know how the brig timers/perma/labour camp work, I have a pretty good understanding of space law, and do my best to not overstep and be unfun for other players. I don’t have any warden time, but I’ve spend a few shifts as secoff being a psuedo warden, and would be able to provide assistance there if needed.

Engineering: Engineering is the only department I haven’t touched at all, and it’s the next one I want to learn.

I also have like 30 hours PAI, I love playing pai. It’s basically like the in game mentor role a lot of the time too.

Command: The only command role I’ve put any real time into is HOP, I know the ID console inside and out, and pretty often help other HOPs add access to badges they were struggling with (it’s almost always forgetting to do trim first) In my time with HOP though, I’ve played acting cap quite a few times, and understand the expectations and duties well enough to be able to provide assistance.

As I’ve been playing mostly sec recently, the biggest thing that’s stood out to me is most players really don’t like interacting with sec at all, and I think alot of it comes from job or access related frustrations (i.e. not having a RD in science) and so they go to fix the issue by let’s say breaking down the RD door instead of asking command for it to be opened up, or for someone else to manage the research. This leads to some random scientist getting arrested with a poor taste in their mouth, because in their mind they were just tryna do their job. I’ve been trying to be a lot more lenient and understanding in situations like this. Just talking to the dude and saying “Hey this is not allowed, I understand why you did it, but in the future ask the chain of command” ends with a much more positive interaction for everyone. Now I know this obviously isn’t always possible due to other station threats or situations but I’ve been trying to be less arrest happy for misdemeanors like that, and it’s been improving my overall interactions with players as sec. I play sec to shoot bad guys, not to ruin random peoples games for walking two tiles the wrong way

Other than that, I enjoy the server a lot, I think the tight rules are pretty solid, and I think you have the right balance of strictness to improve the new player experience while being laid back enough with ahelps beforehand that I don’t ever feel inclined to break the rules and ruin other peoples games. It’s a lot of fun here! :)

Super pleasant to interact with on Discord and a solid record (that is to say, no record at all) with following the rules in-game. +1

i don’t really know this person +1

Accepted! Welcome to the mentor team!