Ban Message (Gyazo/imgur or copy and paste): https://imgur.com/0nXPiUK
State your appeal:
Well, I got banned through the discord. This was also a game ban. I honestly thought maybe since it’s been two years it would be funny to ask (just wanted to see what you guys would say about it)
However, I don’t think it’s cool to ban me because I was friends with someone who was a shitter on the server two years ago. I like playing on the server and I recently started playing again. I think that asking to have someone unbanned isn’t a reason to perma ban someone from the discord and the game. I just thought since it’d been so long maybe it would just be a funny thing to say… Well, I haven’t really had any issues with the staff and I think I was banned one other time on the server around 2 years ago or so. Sorry for the inconvenience :/

And to add to that, I suppose it makes sense to associate me with being bad by asking to have someone horrible unbanned. However, I’m not like that. Never was, even that long ago. And the bad part is that its been so long that all of the admins I used to know and stuff are kinda gone now and I’ve got no one to vouch for me :/

I hope I can have another chance at the game and discord. And it is noted to not mention or ask about he who shall not be named. Thanks.

I think after your more colorful history on fulp this isnt gonna work out. Between saying your friend was helping / going to ddos the server and sending fake screen shots, problematic language on the discord, and how youd act in game i mean your lizard name was literaly eats the booty. How you had asked for your friend to be unbanned in the past was calling me and a previous admin at 3am on discord. I really cant see this working out im going to have to deny this 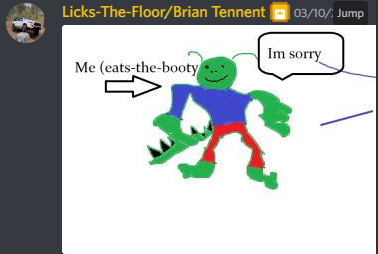 Never was, even that long ago. And the bad part is that its been so long that all of the admins I used to know and stuff are kinda gone

Me and wind are still very much here and were there for all the drama.